Dan Nauman began forging in 1979. He has traveled the US to learn what he can from others about forging. He has operated out of his studio in Kewaskum, Wisconsin since 1987. In 1990, Dan incorporated Bighorn Forge, Inc., and began forging full time in 1993. From 1995 to 2002 he operated an additional shop in Baileys Harbor, WI. He added another shop in Cedarburg, WI in 2000, and operated that shop until 2006. Today, all his work is performed at the studio in Kewaskum.

Dan has taught, demonstrated and lectured on forging at many conferences, workshops, trade schools, colleges, and museums around the country, and also at his studio in Kewaskum.

In 1998, he was the Project Director for a video entitled "Forged Elegance, the Lifework of Master Blacksmith Cyril Colnik", which aired on Wisconsin and Milwaukee Public Television stations.

Dan has won two international awards for his design and workmanship from the "National Ornamental and Miscellaneous Metals Association" (NOMMA) for a chandelier made for the "Captain Frederick Pabst Mansion"in Milwaukee, WI, and for a sculptural gate made for a private party residing in Port Washington, WI.

Forging in the tradition of the old-world craftsmen, Dan designs and makes gates, railings, door hardware, furniture, lighting, fireplace equipment, and sculpture, in many different styles for homes, businesses, and institutions. 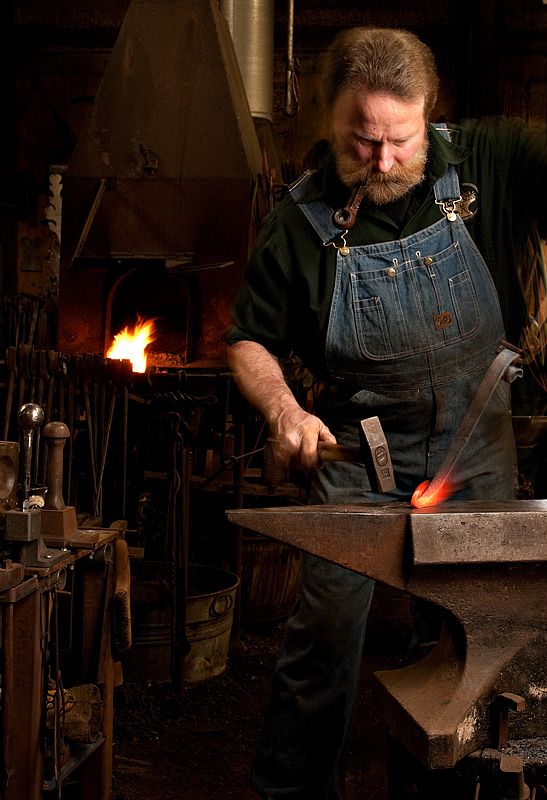 He has served two terms as a board member for the "Artist Blacksmiths Association of North America" (ABANA) an international blacksmith's association, from 2000-2006. He chaired a committee of seven which wrote lessons in forging for one of ABANA's trade magazines from 2002 to 2009. The lessons are called "Controlled Hand Forging", and include over 25 installments in forging process, shop layout and shop safety.

He considers forging to be a continual learning process, with never-ending possibilities. His work is widely varied, highly detailed and imaginative, including flowing forms, different metals, applied colors, and also utilizes the various processes of repoussé. His work can be found in many of the finest homes in this country.

In recent years, though he always thrills in classic style, his attention has been directed towards more sculptural elements, and also pure sculpture.