Aislinn Lewis, from Virginia, and a student at the “American College of the Building Arts“ (ACBA) in Charleston, SC, recently completed six weeks of training here at Bighorn Forge.
In 2009, Bighorn Forge began accepting student-interns from the ACBA to learn more about forging, as well as the business of forging. The students live and work with me and my wife Toni at our home and shop in rural Kewaskum, WI. The first student-intern here was Jimmy Breazeal of Charleston, SC. Jimmy spent 10 weeks with us in 2009. In 2010, Colon Crader, also from South Carolina, was with us for six weeks. This year, we welcomed Aislinn. 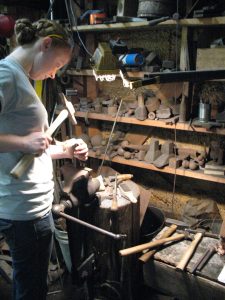 Along with occasionally helping me with my current project for “Lynden Sculpture Garden”, a driveway gate, Aislinn made five basic sets of repoussé tools for me, as I will need them for a class in French Repoussé I am teaching in late August at the “New England School of Metalwork“ in Aubern, Maine. 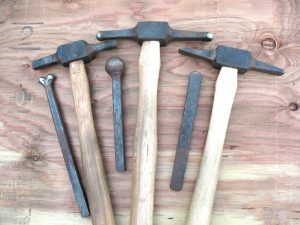 Above are tools Aislinn made for herself: (from left) A double ball stake, a planishing hammer with round/square faces, a large ball stake, a ball hammer with full ball/half ball faces, a double ended raising stake, and a raising hammer with standard/fine faces. She became proficient at making these because, as I stated above, she made an additional five sets of these same tools.
Aislinn was also learning…from scratch mind you…the process of repoussé from me. She has a keen eye, and it was soon obvious to me that she would excel rapidly at this aspect of metalwork. Below are pieces she worked on while here. 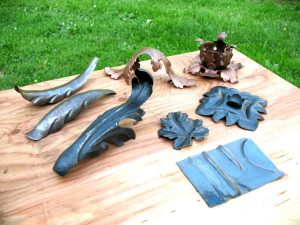 The bottom most piece are her first attempts at repoussé, forming a half vein, full vein, tapered vein, and two curved veins in the same arc, (as they were opposing shoulders.)
Counterclockwise from the top left: An anticlastic water leaf, a water leaf, an acanthus leaf, a grape leaf, a rosette with center ball-husk, a copper husk sitting upon a copper bobeché, and an unfinished copper husk.
Among other activities while here, we took Aislinn to Milwaukee to “Villa Terrace Decorative Arts Museum”, the “Captain Frederick Pabst Mansion”, as well as several other places to see the work of famed master blacksmith Cyril Colnik (1871-1958).
But Aislinn’s journey doesn’t stop here…as she continues this year’s internship by going to study for two weeks with my friend and fellow smith, Tom Latané and his wife Kitty in Pepin, WI.
I look forward to seeing what the future brings to this bright and ambitious student of the craft and trade. We were blessed to have had Aislinn here, and will miss her dearly. 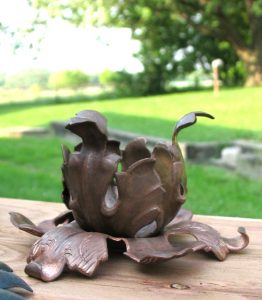 ….Dan Nauman
“Endure the betrayal of false friends…fulfill the dreams of children.”…Author unknown.