Continuing with the liturgical aspects of decorative ironwork………

This Grave Cross was one of several pieces I restored for a client in southeastern Wisconsin. This collection of ironwork is extraordinary in that most of it is of a distinct European flavor, spanning several styles and applications.

The exciting aspect to restoration is being able to see how the piece was made after removing the paint. I always learn from these works.

In this case, several joinery methods were employed, i.e. forge welding, riveting, arc welding, brazing, and collaring. The images below were taken after sand-blasting the piece, revealing the joinery and also many tool marks. 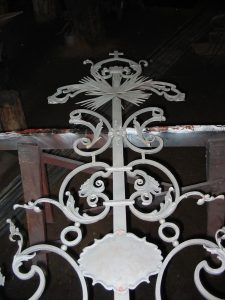 Before the paint was removed, I was not too excited about this piece as I believed the flowing leaves were castings. Paint often conceals the real story behind the piece, especially if there are several layers of such.

After blasting, I was stunned as the leaves clearly revealed tool marks, insisting that they were indeed made by hand. Take special notice of how in some cases, they were layered upon each other creating a rich depth to the motif. 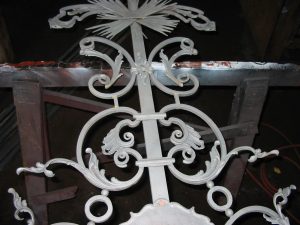 This is the type of workmanship that is often overlooked by laymen, and almost by me, until the layers of paint were removed.

These leaves are absolutely breathtaking in their movement. 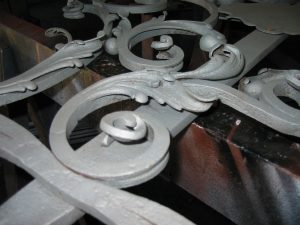 Note the forge weld in the image above. All of the leaves were forge welded to this piece in a masterful manner. 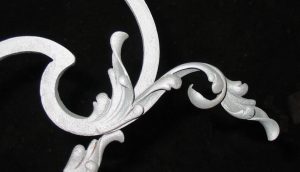 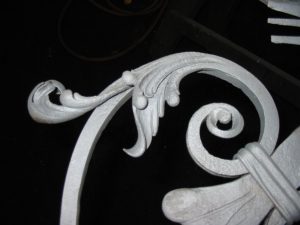 I was captured by how subtly the scroll above ends up on the diamond. Another fine attention to detail by the smith.

Below we see a classic baroque motif, often associated with the more over-the-top “Rococo” style. 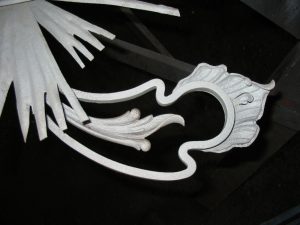 Below we see in both images a smorgasbord of joinery techniques. Note the copper rivets in the last photo. 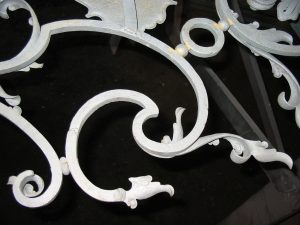 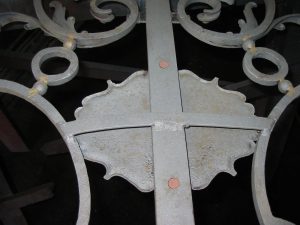 It is entirely possible that I was not the first to restore or repair this piece, which might explain the use of some of the joinery methods, especially the arc welds.

I apologize for the first image, which was taken before restoration. If I have the chance, I will obtain a better image of the restored piece to share with you.

At some point, I would like to figure out the process of how these leaves were made. They are some of the finest examples of this style that I have seen in this country.