Behind The Scenes I

Behind The Scenes I

Blacksmith Francis Whitaker, (1906 -1999) was in Germany for two years working for Master Blacksmith Julius Schramm. Schramm (1870 – 1945) asked a young Francis how he was to address a specific problem on a stand to hold a large bowl. Francis replied to the master that he would simply “put some little supports in where they cannot be seen.” Schramm replied, “Franz, there is never anything that will not be seen!”

Schramm was a perfectionist. He believed all aspects of a design should be carefully thought out before beginning to forge.

He also stated that “One must not only satisfy the client, but one must also satisfy himself.”
These are excerpts from the book “My Life as an Artist Blacksmith” by Francis Whitaker, copyright 1995.

With this in mind, I now point you towards Master Blacksmith Cyril Colnik. If you know of Colnik at all, you are likely familiar with his famous “Masterpiece”. Many believe this fine work is to forging as the “Mona Lisa” is to painting. But paintings are for the most part two dimensional, and while looking behind the canvas reveals something about the painting, it is the front that speaks to us……not always so with a forged piece.

Have you ever been curious as to how Colnik addressed the back the “Masterpiece?” If so, then the following images may interest you. 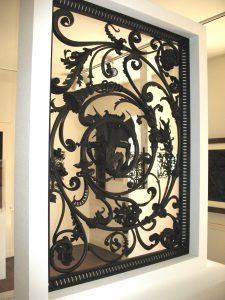 When redesigning the Colnik galleries at Villa Terrace Decorative Arts Museum (Milwaukee, WI), I felt it imperative to display this, as well as several other pieces, in a manner in which the full piece could be examined. This allows the audience an opportunity to fully appreciate the work. Now mounted in such a manner, I took advantage by photographing aspects of the back of “Masterpiece” that I found interesting. I would like to share these features with you.

Below is the detail behind the imp-like figure in the middle, whom many believe may be Colnik’s version of “Woton”, god of ironworkers. 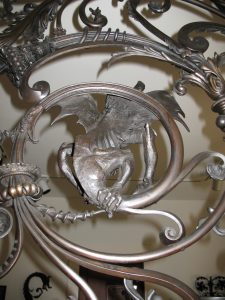 This next image shows the bottom center of the “Masterpiece. 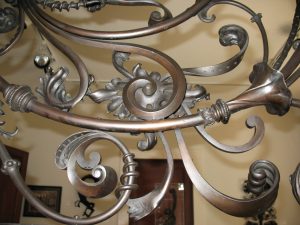 This image below reveals the backside of one of the large carvings in the lower right hand corner. 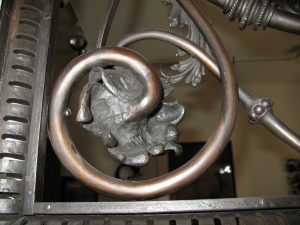 This last image shows the back of another carving in the upper left of the work. 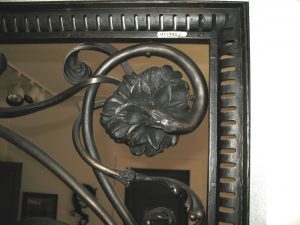 We really have no clear indication as to how Colnik intended this piece to be displayed, or in what venue. Upon interviewing Herman Rittmeyer back in 1992, Herman gave me this account of what the “Masterpiece” was to represent:

He said that the German government wanted to show the world their ironworking superiority at the “World’s Columbian Exhibition” (World’s Fair) in Chicago in 1893. Upon discovering Colnik’s talent in metal, they instructed him to design and execute the finest piece he could muster, and gave him as long as he needed to do so. The idea worked, as the piece was awarded a gold medal at the fair.

Note: Herman Rittmeyer rented Colnik’s shop after Colnik retired. Colnik often visited the shop simply to observe the goings-on, sitting in a rocking chair with a blanket on his lap.

Whatever the intent for the piece, it still stands today as one of the finest pieces ever created by a blacksmith.

Certainly Colnik recognized the importance of finishing all aspects of the work in fine detail, as this piece attests.

At some point in the future, I will show images from the back of the Colnik piece entitled “Escutcheon”, which also made an appearance in Chicago. Made from 16 gauge iron, “Escutcheon” is a fine example of the pitch method of the repoussé process.

“One must not only satisfy the client, but one must also satisfy himself.”…….Julius Shramm, German Master Blacksmith (1870-?)