The debut of “Console Table 2015” was last evening, at an event entitled, “Artist Bike Night” at the “Iron Horse Hotel” in Milwaukee, WI.  I was invited to exhibit there along with three other artists.  I must have seen over three hundred bikes…mainly Harley-Davidsons.  It was an enjoyable, and LOUD, evening.
This piece, 16 x 18 x 25-1/2 in, was inspired by the large acanthus leaf on the upper portion of the “S” scroll.  I had been wanting to make that leaf for several years.  So I finally made it last month, while visiting my friend Tom Latané, a fine fellow and blacksmith in Pepin, WI.  Tom and I had been working on twin projects, two tin kitchens, on and off for the last couple years together.

Well I finally finished mine, and thus I had a day or so to “play” in Tom’s shop before returning home, so I began to work on the leaf. 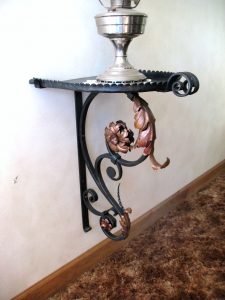 Upon finishing it, I thought it was too nice a piece to not have a home or function, so I designed the console table around the acanthus leaf.  Yes, this is backwards, as the leaf is usually the salt and pepper, not the main course.  However, that is how this piece evolved.  I initially designed this project to be a shelf bracket.  I worked a little on it one day, set it aside in the shop to work on a project that pays the bills.  I would glance at it every so often, and think, “What does this piece want added to it?”  So it evolved slowly to what you see here in these images.
This is definitely not how one should execute a project, however since this was a piece for me, and to be used as a display piece, I bent the rules a bit.  That said, I did have a full scale lay-out of the primary shape on the lay-out table.  Every so often, I would take a piece of soapstone and draw in another element.  The lay-out kept me honest, and the project sound.
One aspect of this project that I enjoyed was using copper for the repoussé elements.  I typically use 18 gauge steel, but in this case I used 16 gauge copper.  It forms very easy compared to steel, as one might expect.  However, it also shows every hammer blow…on target or not.  That said, the errant blows are more easily erased in copper than those in steel. 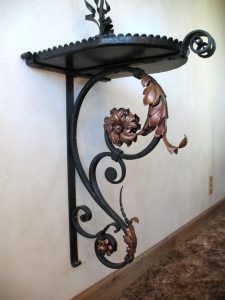 The finish is primarily bee’s wax, however the table pan was finished with black “Gilders Paste”.  I plan on topping the pan with 3/4″ marble or granite.
By the way, if you ever wish to have a truly fine dining experience, I highly recommend “Smyth”, the restaurant located inside the “Iron Horse Hotel.”  I have dined there on several occasions, and every time the cuisine has been exceptional.  We ordered two hors-d’oeuvres; one was spiced goat cheese, and the other was  seasoned scallops on a bed of fresh corn.  The hotel and restaurant are a stone’s throw from Milwaukee’s “Harley Davidson Museum.”
…Dan Nauman

“Nobody goes there anymore…it’s too crowed.” – Yogi Berra, when asked about a local restaurant.