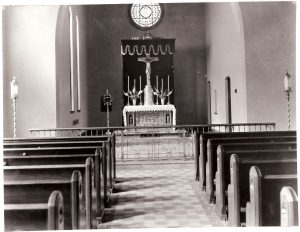 This is the second installment of master blacksmith Cyril Colnik’s liturgical ironwork from my archives. Unfortunately, these images have no indication on them as to where these pieces were installed. 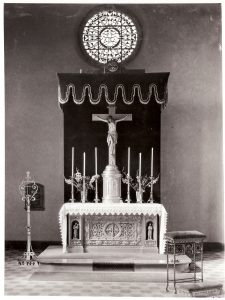 The image above shows several fine pieces; candlesticks, a prie-dieu (prayer kneeler), *, and what appears to be an eternal light, (or sanctuary lamp*) on the left. Notice that the eternal light and the candlesticks share similar features.

*The names of these two items were supplied to me by blog reader Thomas Forrest, who goes on to explain that “prie-dieu” is French for “pray (to) God,” and is the name for the prayer kneeler. The sanctuary lamp is used in the Catholic chapel or church to let the faithful know that the Blessed Sacrament is present. (Thank you Thomas.)

The image below shows a close up of one of the candlesticks that are on the altar above. A simple design, with clean lines. The chasing on the legs is crisp and well balanced. 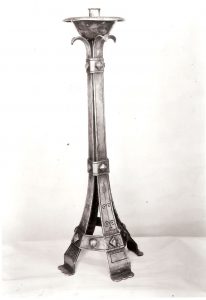 Below we see another “Eternal Lamp”, which signifies God’s eternal presence, and all encompassing glory. The sign atop the piece is a symbol of Christ the Savior. The two birds represent peace. 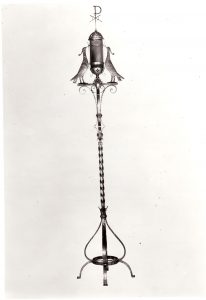 Another set of candlesticks is shown in the image of the altar below. The photo is deceiving, as there actually appears be two sets, of two different heights. 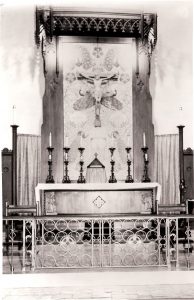 The trefoils in the gate above signify the “Holy Trinity.” Gates are typically more detailed than their mating rails or piers, as we see in this example.

The next image is a close up of one of the candlesticks. The scrolls in the base are extraordinary, with their delicate snub ends, and forge-welded diamonds. 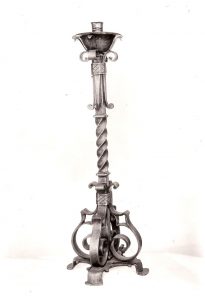 Below is another railing and altar gate. Here is another good example of how a gate typically is more embellished than the rails. As well it should, as it is the focal point of the work. 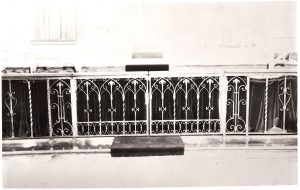 Finally, I have saved the best piece for last….a truly over-the-top Rococo Cross with a reliquary.

The fair, also known as the “Columbian Exhibition”, was also the debut of Colnik’s “Masterpiece”, for which he also won a medal. (See images of “Masterpiece” elsewhere in this blog.)

This is one of two photos of this same piece. The other image shows a view of the cross at a slight angle. Both have the same hand-penned inscription at the lower right. 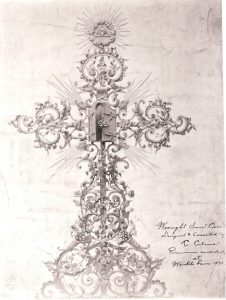 Note: The “Eye in the Pyramid” atop the cross is often misunderstood, as many believe it is a Masonic symbol. In actuality, it is not now, nor has it ever been a Masonic symbol. Rather, it symbolizes “God’s All Seeing Eye”, or “God’s Eye of Providence.”

This cross is a fine example of Colnik’s attention to detail, as well as his penchant for the ultimate in composition.

It would be wonderful to see this unbelievably embellished piece up close and personal……if we only knew where it was. Maybe one day someone will see this image, and reveal its whereabouts….as well as the whereabouts of the other fine works shown here.

“The heavens declare the glory of God, and the firmament shows his handiwork.” ……..Psalm 19:1