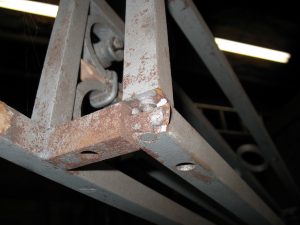 These are images from a repair job for a client whose iron fence had been struck by a car. The fence was made by Cyril Colnik.
Repairing and restoring vintage ironwork has many rewards and also some surprises. In this case, the surprise was how Colnik solved a joint problem on a post. The horizontal bars needed to be in the same plane in order to keep the post’s design neat and balanced. Colnik solved the problem in a manner of which I have never before seen.
The above image shows the bottom of a post where one leg had broken off entirely, neatly revealing a tenon pierced by a smaller tenon. Below is a close-up of the area. 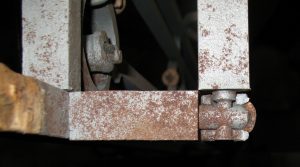 Though this is a clever way to solve the problem, it makes for a potentially weak joint, as there is not much metal left surrounding the joint. However, since there are four anchoring bars in this post, strength was less of an issue.
Note also in the first image the use of screws. This piece employed many different joinery methods including tenons, screws, brazing and oxy-acetylene torch welding.
Below are images from the actual site just after the accident. 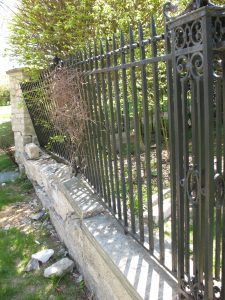 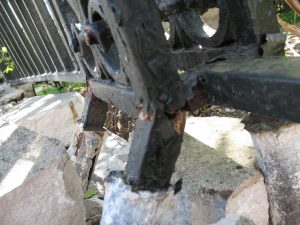 The above image reveals the lead that was used to affix the post legs into the concrete cap. Molten lead was often used for this purpose in Colnik’s day, and some smiths still use this method today.
It is a sound method to do the job, however it is unfriendly when it comes to a repair. Lead is very difficult to remove, especially if the clearance between the iron bar and the hole is minimal.
Personally, I do not usually sink a post in a hole anymore, as through several repair jobs, I have learned that using a mounting plate provides a secure base, and allows for easy removal in the event the post needs to be removed for maintenance. The plate is simply bolted into anchors in the concrete or brick.
I also use stainless steel fasteners to avoid corrosion. Many of the vintage repair jobs where steel or iron fasteners were used are so corroded, that even applying heat does not loosen them. Using stainless fasteners will allow for easy removal years down the road. The blacksmith who then repairs or restores the ironwork in the future will have a much easier task removing them.
……..Dan Nauman
“Service to others is the rent you pay for your room here on earth.”……Muhammad Ali, Champion boxer