Selected forged railings designed and created by Dan Nauman.  The above railing won a gold medal from the “National Ornamental and Miscellaneous Metals Association” (NOMMA) in 2013.  The image below shows the verdigris patina that is evolviing after a few years. 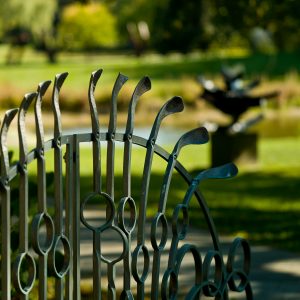 The above railing panels were exterior railings for a patio overlooking Green Bay, on Lake Michigan.  Unfortunately, the client would not allow me to take photographs on location, so these are studio shots.  The sections below were for the same mansion, but a different patio.
On both railings, the panels shown had simple two-foot panels between to divide them, and also to give the eye a break from the flowing lines.

The above indoor pool stair rail was from the same mansion as the railing panels above it.  I was not allowed to photograph this in place either, so this is a studio shot.  The stainless steel was acid etched to give teh finish a look of pewter.  Below is a detail shot. 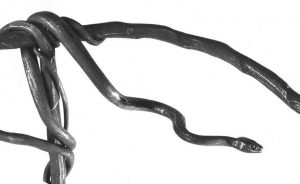