French repoussé, also called “hammer and stake raising”, is one of several repoussé processes. This method utilizes several small raising hammers, that lightly strike the sheet metal over various stake forms held in a vise.
Another process involves “sinking”, by using various punch-like forms to force the sheet metal into iron or wood stakes and stumps. This method is often used in conjunction with the French method.
Still another repoussé process uses“pitch”, which uses a stiff, but slightly soft pitch, tar or even plasticene as a back-up to the sheet metal. One then delicately forces the metal down into the substrate (pitch) with various, typically tiny, punches.
How does a leaf evolve from a flat sheet into a flowing form?
The story board below shows the progression of a leaf, or in this case, a husk (or calyx) using the French Repoussé technique. 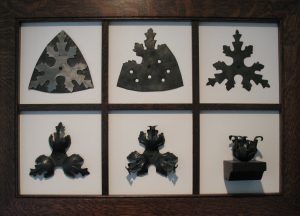 The first stage , in the upper left, shows the master pattern (bright silver) on a darker sheet, which will have the pattern traced out on it with a steel scriber. The pattern is shown in the next panel as partially cut with tiny chisels, some straight, and some curved chisels. The third panel shows the pattern filed to a finished shape, and ready to form on the stake with a raising hammer. 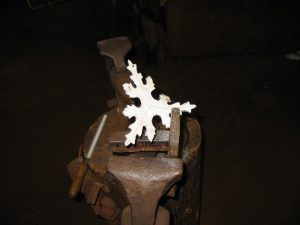 An alternative to scribing the pattern from a pre-made master is to photo-copy the pattern, then cutting it out and applying it to the sheet metal with a spray adhesive. The image above shows just such a pattern after being rough cut in a band saw, then finish filed to shape. Notice the filing vise holding the pattern, which allows the piece to be filed at a 45 degree angle.
The image below shows a punch, and a stump used to make holes which automatically form the radius at the bottom of the gores. The wood offers enough back-up to the metal to punch through the metal without too much distortion. The punch is slightly dished, sort of into a fishtail shape for more of a shearing action. Punching goes much faster than drilling, and leaves less of a burr. 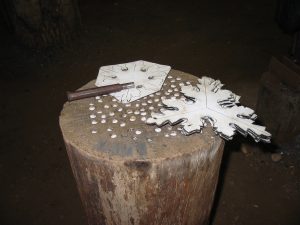 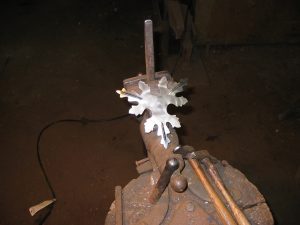 The above image shows the “general purpose” stake used to put in the center veins, as well as some of the lightweight hammers used for the job.
The image below shows the stump and hammer used for the next step. Lead could be used for this step as well. Notice that the middle of the pattern has been left alone. This allows the stakes and hammers easier access to the piece, as well as for further development in the final shaping into the husk form. 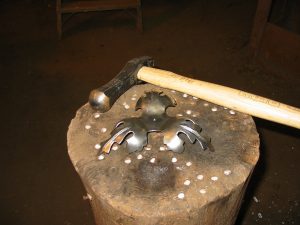 This piece is now in it’s “primary shape”, and the final veins can now be applied. If all the veins were applied first, and then the primary shape, some problems will arise. Veins add stiffness to the metal, and forming the primary shape becomes difficult, or impossible without destroying the veins. (Note: Think about the hood of your car or truck. If it weren’t for the crease, or “raised vein” in the middle, the hood would flap up and down as you drive down the road.)
The image below shows further development in the larger gores, (or sinuses) of the main three leaves in the husk. 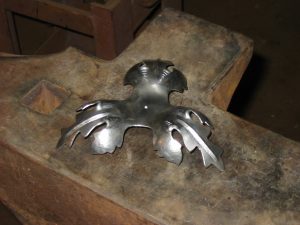 This was accomplished by initially raising on the stake, and then enhanced with a U-shaped dimple using a lead back-up, and a small curved punch. Added detail comes from adding curved chisel marks on these small veins. 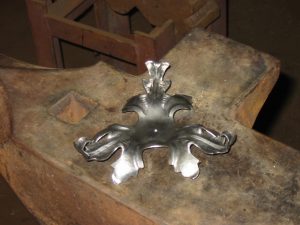 The above image shows the leaf tips scrolled up by starting them over a dog-bone shaped stake. The stake was made by welding two 1/2″ ball bearings side by side on a 1/2″ round bar. (Be sure to anneal, then harden and temper the bearings after welding.) 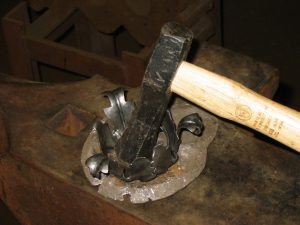 The final form is then accomplished by sinking the pattern into a lead or wooden form with either a round faced hammer or punch. It is further refined by “planishing” (smoothing with a small polished hammer) on a 1 1/2″ round ball, mounted atop a stake.
Below shows the bobeche development on a story board. This piece was made entirely by sinking into stumps and other dish-like forms. 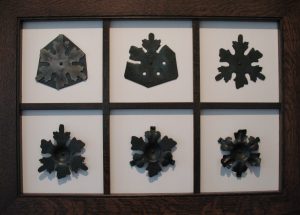 The two pieces represented above were used in a reproduction of an elk antler chandelier I made for the “Captain Frederick Pabst Mansion” in Milwaukee. They went on the chandelier, which had 12 of these pieces in combination. (The original chandelier, made by master blacksmith Cyril Colnik (1871-1958), was removed from the mansion in the early 20th century.)
The image below shows a mock-up of the two pieces as they were applied to the chandelier. 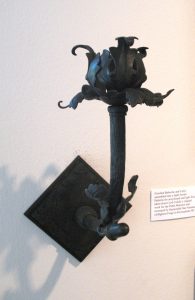 The two story boards and the example above were made for the Cyril Colnik gallery at “Villa Terrace Decorative Arts Museum”, also in Milwaukee. Tom Latané (a friend, blacksmith and woodworker from Pepin, WI) made the two wood mounting boards, as well as the wood escutcheon for the combo piece.
Please note: This entry serves as an overview, as it would take quite a lengthy text coupled with numerous images to be absolutely clear as to how the process unfolds. This entry is simply designed to give a basic understanding of the repoussé process.
…….Dan Nauman
“It’s easy to make a buck. It’s a lot tougher to make a difference.”
……Tom Brokaw, NBC News Anchor.