This is a continuation of the writings of Nahum “Grandpa” Hersom. I am editing where I see fit. My changes/additions will be in parrethesis with “d.n.” This installment, as in some others, seems to be fragmented. I believe these writings were a “work in progress” for Grandpa, and thus some thoughts and processes seem incomplete. That said, I am not eliminating, or re-organizing any of his writings…simply writing verbatim, and only adding words for clarification where I see fit. 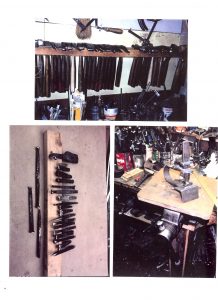 (Note from Dan Nauman…the above image shows some of Grandpa’s tools. The image at the top are just some of his hammers. To the left are stakes and punches. To the right is the mechanical veiner. At the end if this installment I will have an image drawn by Nahum showing specifics.)
Since this process of repoussé is not readily practiced today, since there are few who do practice, and since there is very little written on the subject, these writings are an important link to those men who did so regularly. This is an attempt to preserve these processes, and to pass them on to aspiring artisans.

Leaf Process
On all work the first step to the forming process is to put in the primary shape. This shape may, as acanthus leaves, fit over a scroll or other piece of metal work, or in other cases, be a decorative piece as grape leaves, wall sconces, etc.
This primary shape can follow the lines or shape of a drafted drawing, or fit to a previously shaped form, like scrolls. As you put in the primary shape, folds will form in some areas. Keep these hammered down. If a fold happens, it cannot be removed and may cause a large crack to form in the work. In work on heavier metals, spot annealing (normalizing d.n.) and or working while hot may help. Make corrections as difficult spots appear, not later.
When hammering leaves etc., always prepare metal for next step that follows. Remember, the steps to form a leaf go from “1 to 10″, and if you miss any in-between step, you’ll have a high loss of time making corrections, or a piece could be (end up as d.n.) junk. Hammer leaves from center out to edges. Configuration or definition lines can be put into leaves either by the use of a (mechanical d.n.) veiner or by free style hammering over an under tool of appropriate shape.
On some work, armor or medallion faces, after a primary shape is formed or raised, lead or pitch is poured into the work for the next forming steps. When working alone, sometimes the workpiece is so large, the above has to be done using punches, as one cannot hold the work steady over stakes for forming.
Sometimes, when copying leaves from a picture, you might get the center section between segments too wide to form easily over scrolls made of, say, 1/2” material: by either taking a long V out of the center of the leaf, or by redrawing segments closer to the centerline to narrow the section, it will be easier to form the primary shape into the leaf as well as get the reverse ball end that is part of the acanthus leaves.

Half Leaves
Half leaves that are attached onto only one side of a scroll.
A “half leaf” – two can be made opposites, and can be attached to each side of a scroll-can be laid out with its outer rim of a larger circle than the scroll. When attached to the scroll, it will assume a cone shape. This shape need not be very deep, but will facilitate the hammering of the segments if they are to be rounded out from the scroll instead of lying flat against it. In either case, a template or templates are made of cardboard, masonite, or tin, to conform to the shapes desired, since any work is shaped to complex and multiple contours. Many templates may be needed for different areas.
Further hammering to put in lines or configurations on leaf segments, which can distort the primary shape, sometimes make the primary shape deeper, wider, or even narrower than the finished leaf, thus it may be necessary to have two sets of templates to work to: one for primary shapes, and one for finished leaves.
As hammering progresses, constantly check the overall shape with templates. It is easier to make corrections as one goes than at the final stages of completion. This is especially important when doing husks or other folded, overlapped, or closed shapes. Getting the original tools into these shapes to make corrections is generally impossible.
Templates are necessary when forming multiple same size and shape leaves. When doing more than one leaf, apply one step to all the leaves, then the next step. Otherwise, the Smith has a constant and time consuming labor changing under tools and hammers which collect (and hide) around the vise or bench in a tangled mess and must be constantly hunted for.
Places on leaves as gores, V areas, and certain raised areas can be used to reshape a leaf back to its intended shape. Practice hammering using vein or table stake or liner stake to raise adjacent areas-both sides of vein.
Raisig on table stake, not using veins as guides, on a rounded edge forming table stake.
Use of lead block for contour forming and to make corrections.
Be sure your overhead lights will show contours and irregularities while you hammer, so corrections can be made as you work that area.
To raise hollow spheres-faces-bowls-thinner metal can be used. The process is called “Dutch raising over a stake.” Cut metal sheet, diameter of finished bowl plus depth of finished bowl. Same method used to raise helmets for knights, vases,cups, and silver work.

Leaves: Installation
Place quality work at eye level, poor (work d.n.) above or below eye level. People only see about 25% of what they look at. 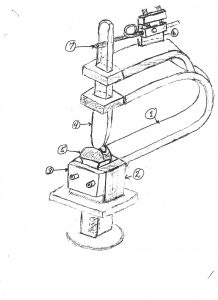 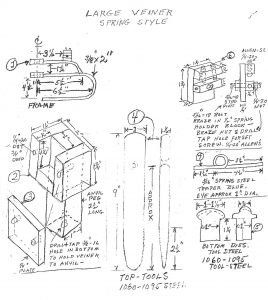 (Note from Dan Nauman…The above images were drawn by Nahum himself, and show his mechanical veiner, as well as a spring loaded version.)
(End of this installment.)
…Dan Nauman