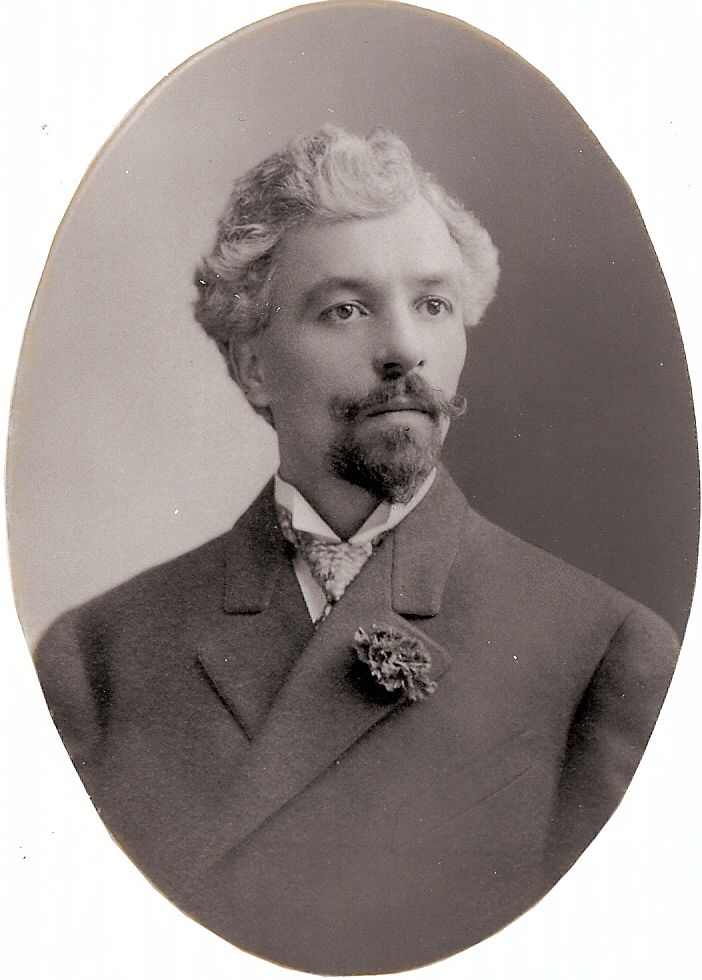 Cyril Colnik (1871-1958) came to America in 1893 to help the German government set up their ironwork display at the Chicago Columbian Exposition of 1893. Born in Austria, Colnik traveled Europe to refine his forging skills.
Today, I will share some rare images of Colnik, as well as his wife, Marie (Merz) Colnik, whom he married in 1905. 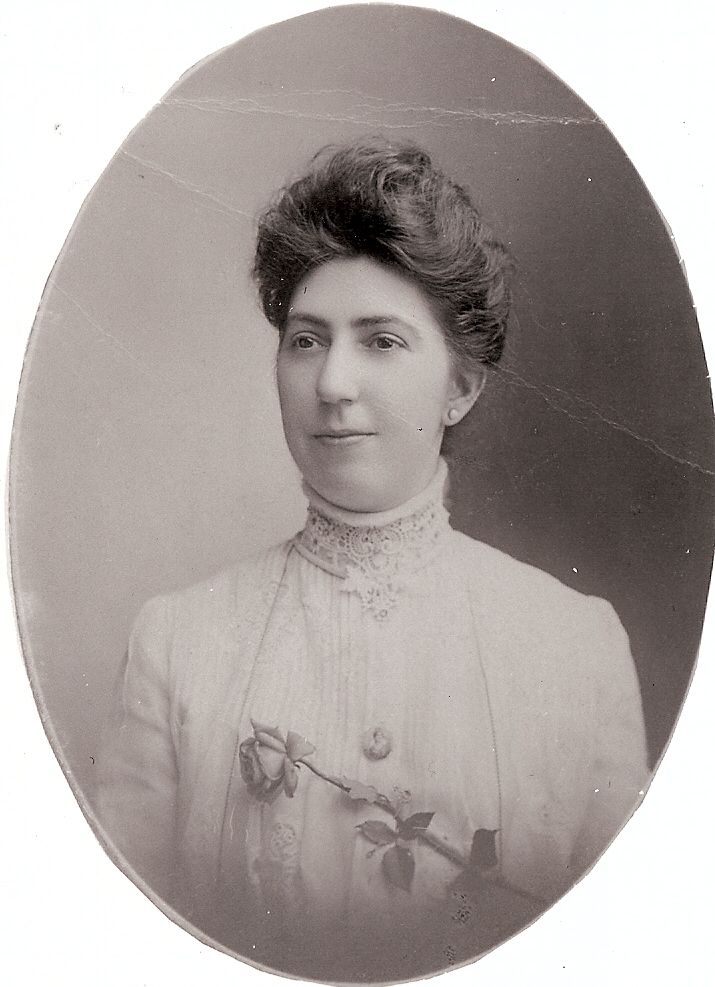 It is said that Marie was vibrant and lively, in contrast to a more quiet and reserved Cyril. Below is a wedding photo of Cyril and Marie. Marie’s posture and grin in this image validate the above mentioned qualities, and also seems to show that she might contain a bit of playful mischief.

Cyril’s daughter, Gretchen, lived with him when Cyril was in his twilight years. She maintained his fabulous works in iron, oiling them regularly. 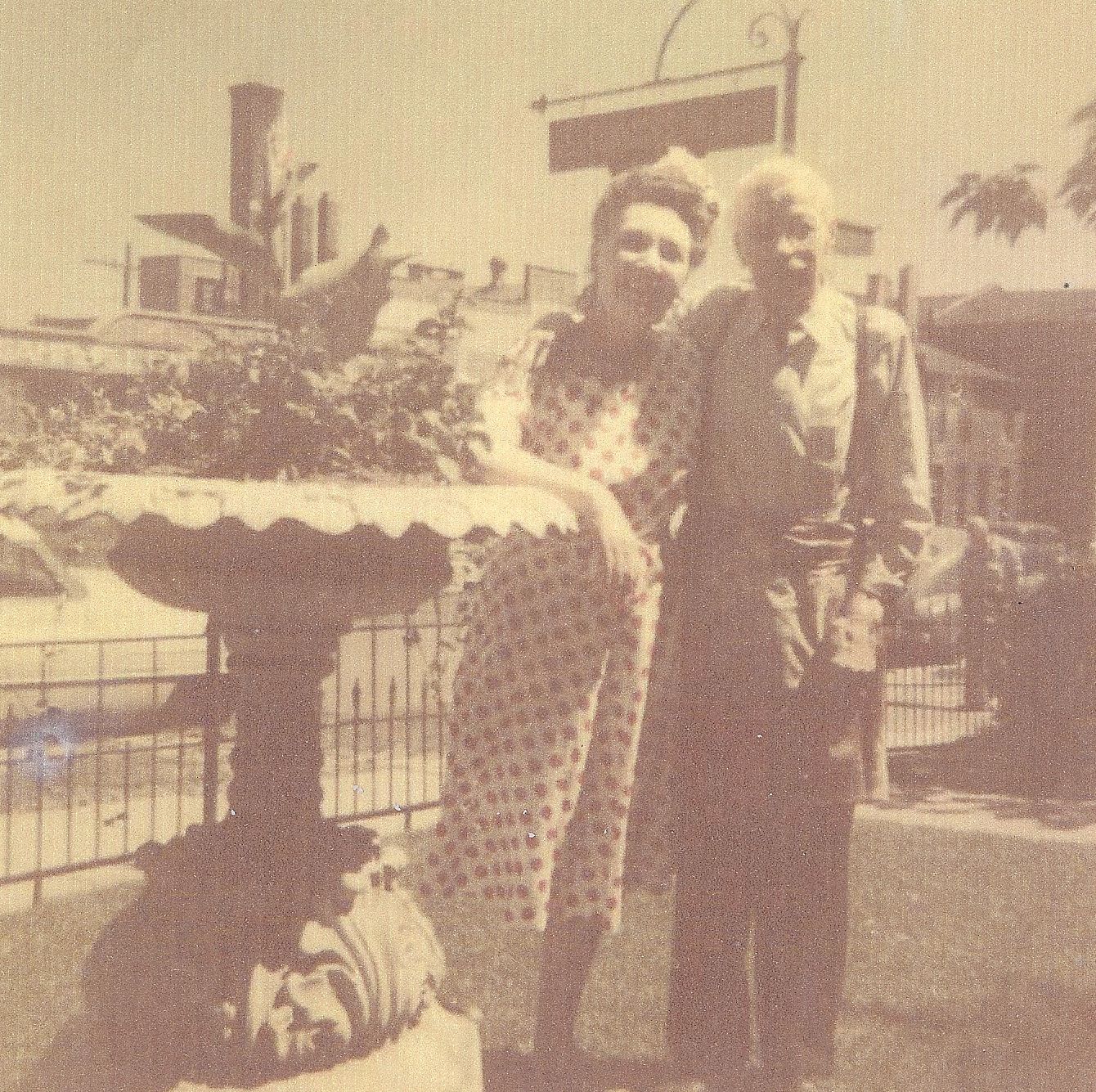 Cyril and Gretchen (above)
Gretchen Colnik was herself a noted personality in Milwaukee, having first her own radio program, followed by a television program in which she would cater to housewives, sharing helpful household tips and craft projects.
Many say she had an eccentric flamboyance, heightened visually as she was also widely known for wearing outlandish hats. Those that knew her personally agree, however they also confess she enjoyed people, liked entertaining, and dearly loved her father.
She was very hospitable, often inviting women’s groups to tea at the Colnik home, or offering tours of her famous father’s ironwork at the home for a mere 25 cents per person. She would then conclude the tour by allowing the visitors to meet Cyril himself.
Gretchen Colnik’s passed away in 1991, and bequethed her father’s ironwork, including his famous “Masterpiece”, to “Villa Terrace Decorative Arts Museum“ in Milwaukee. The museum now has two permanent Colnik galleries, open to the public Wednesday through Sunday. 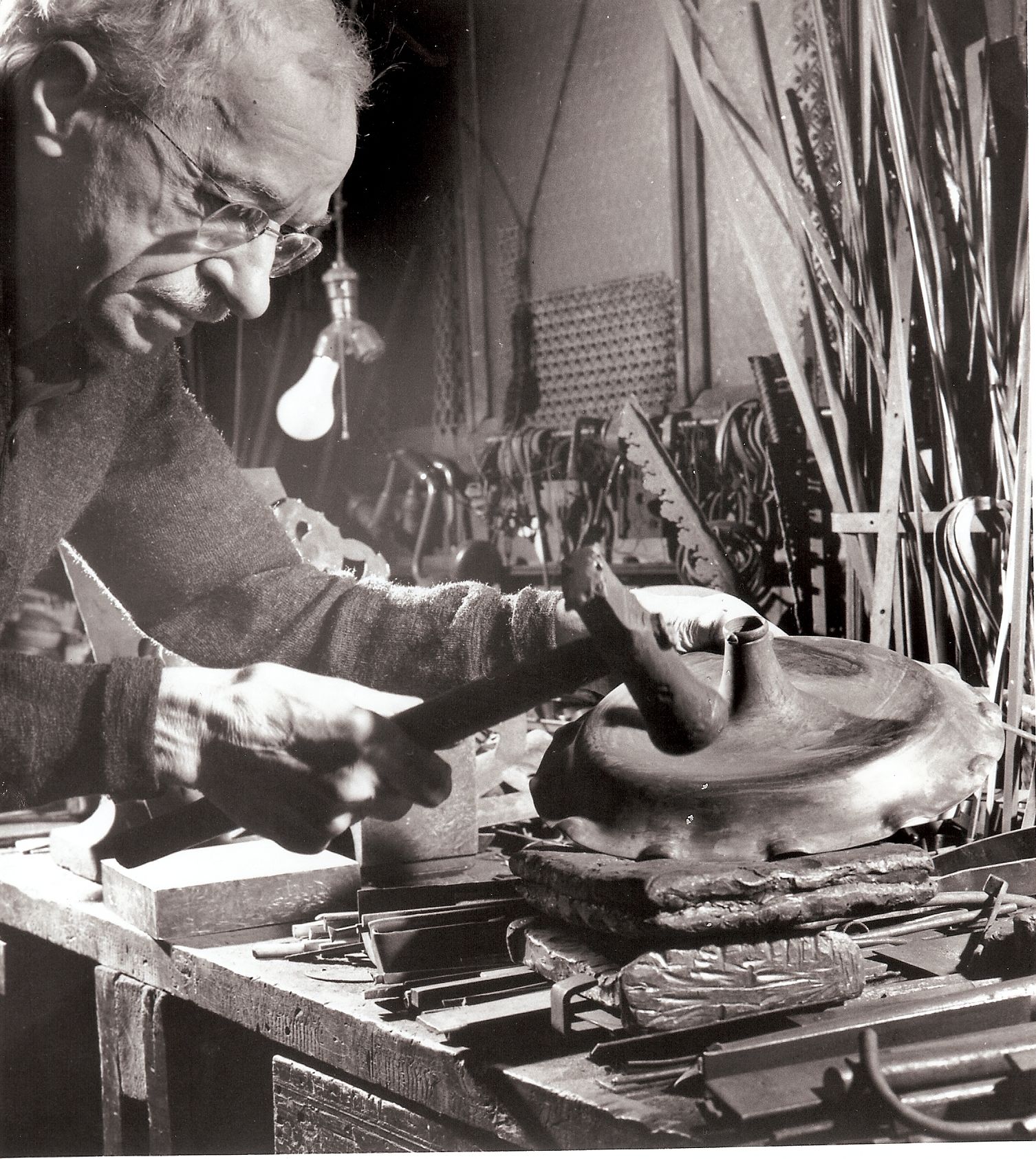 Below is a photo of Colnik and his workforce. Cyril is in the middle row, third from the right (with beard and dark hat.) 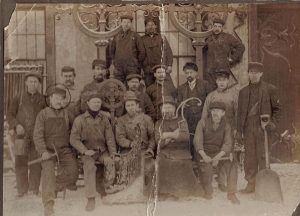 It is not clear as to how many employees Colnik had any any given time. Some say no more than a dozen, while others say upwards of fifty.
The next image was likely taken at Cyril’s home on 8th Street in Milwaukee, which has since been raised. 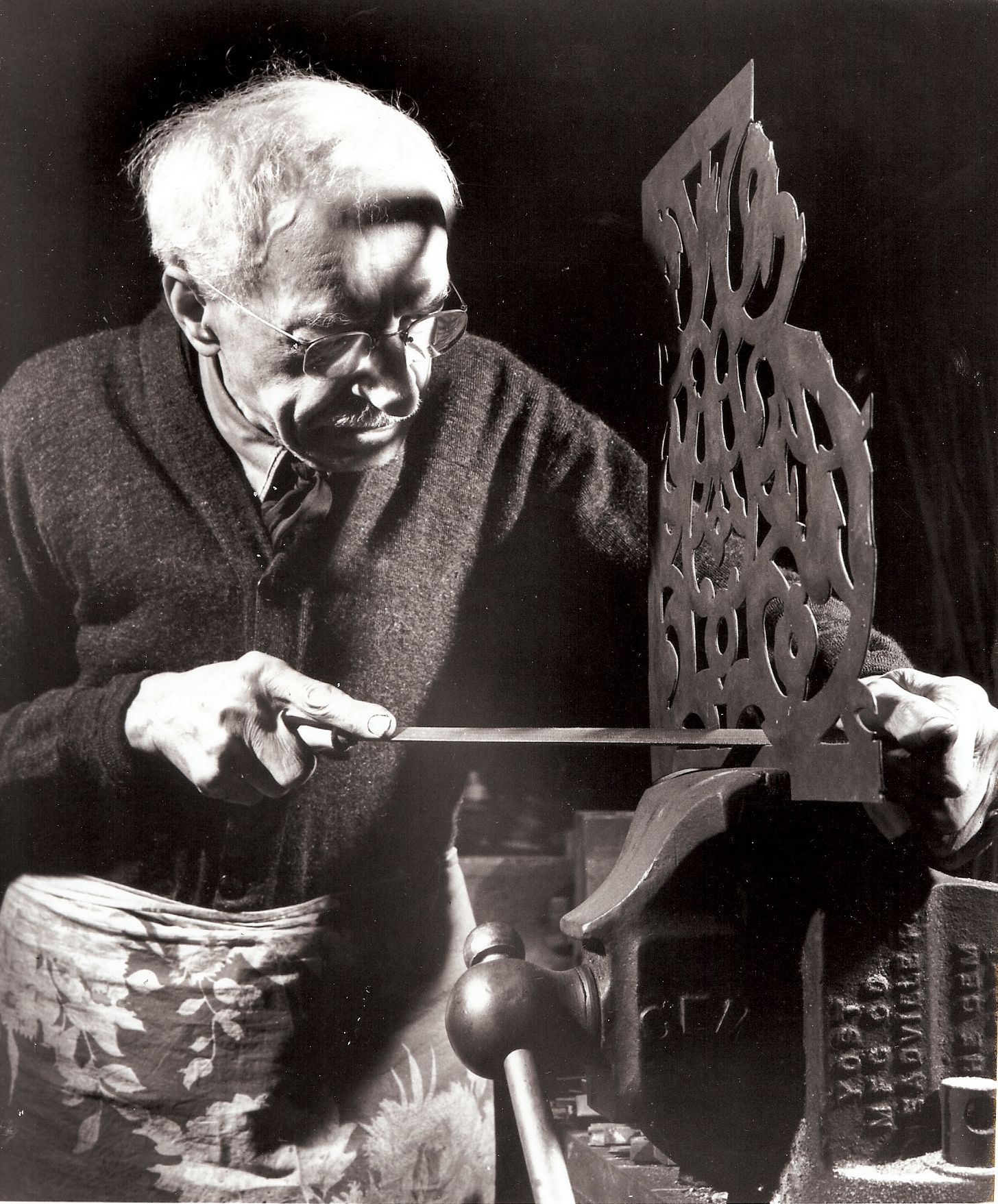 Below is a newel-post made by Cyril Colnik for Herman Uihlein, former president of the Schlitz Brewing Co. in Milwaukee. The railing in which it was incorporated graced the grand balustrade of the mansion, which descended from the second floor balcony from both the right and the left sides. The project took three years for Colnik to complete. 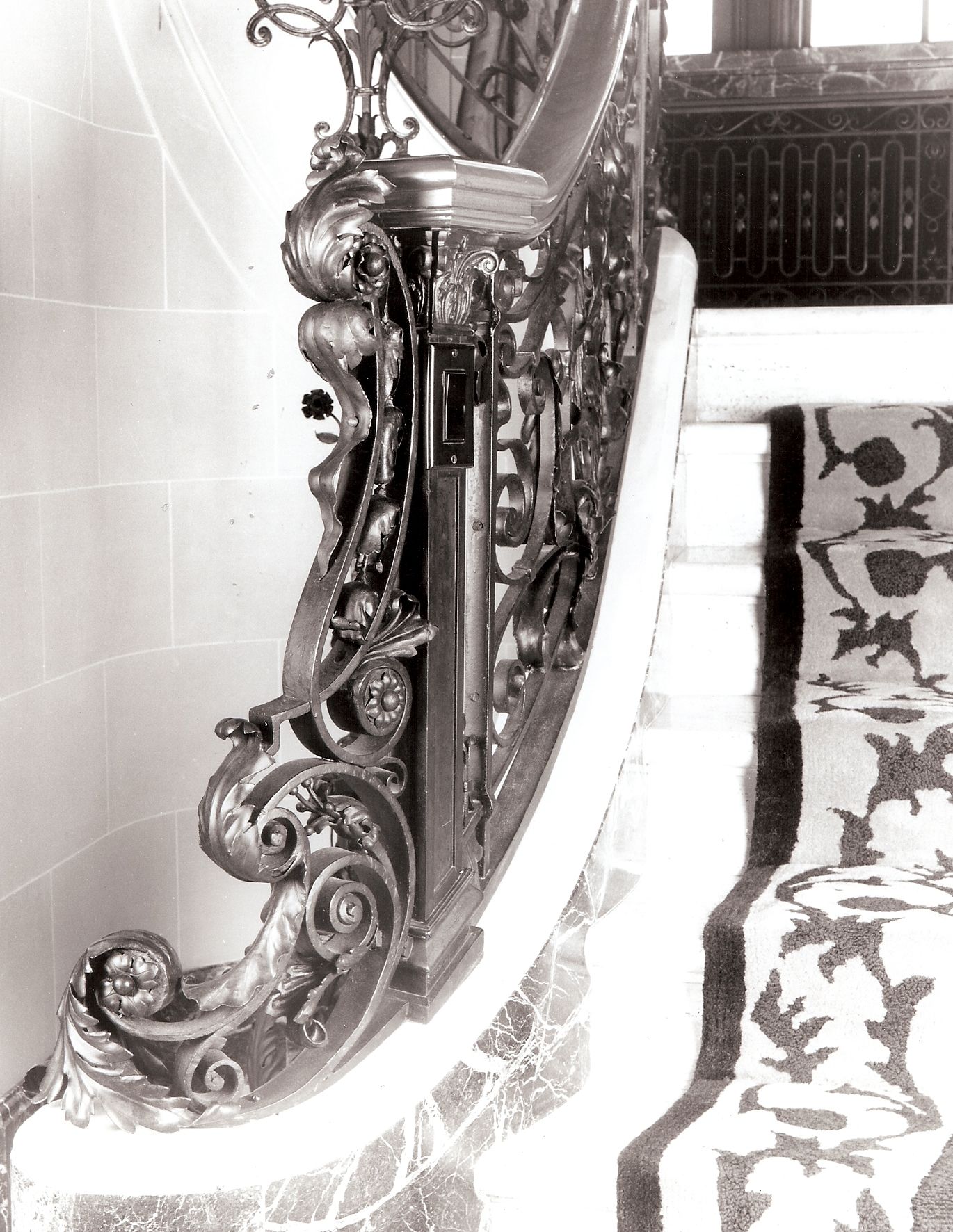 For more on master blacksmith Cyril Colnik, please see other posts in this blog.
…….Dan Nauman
“You’ve achieved success in your field when you don’t know whether what you are doing is work or play.” …..Warren Beatty, Actor/Producer