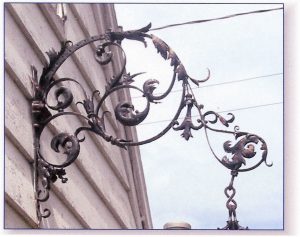 This is a sign bracket that I restored for a client several years ago. The workmanship is reminiscent of German ironwork during the Renaissance.

After removing the many years of paint, it is always interesting to see the various tool marks, forge welds, and in this case, all the brazed joints. Below is the piece after it was sandblasted. 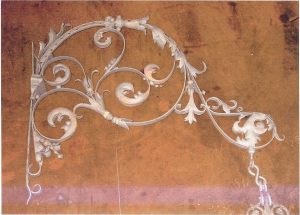 Upon initial inspection, one can see several “braze flashings”, or areas where the copper flowed over more than just the joint. Note also there are several half leaves, which are leaves applied to one side of the bar. In this case, leaves were applied to both sides of the bar giving the illusion of a full leaf. The detail image below reveals how the leaves were applied. 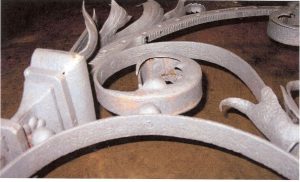 Another interesting aspect of this piece is the corbel-like box. This is a fine representation of the creativity of the blacksmith. Below is a detail shot of the backside, showing the construction. 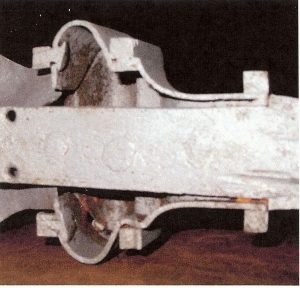 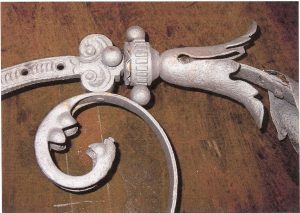 One of the most impressive features was that the piece had the year “1892” chased into the main scroll. It is not common to see ironwork dated as such.

I do not have the measurements recorded, but for those of you interested, this bracket is fairly small, as it projects only about 30-34″ out from the wall. There is also a cast key hanging from the bracket, which would indicate that this might have been the sign for a locksmith’s shop.

Note: I apologize for the quality of the images. They were taken with a newly acquired digital camera several years ago.