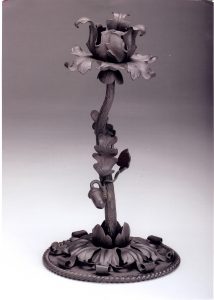 “Candlestick 2005” 7″ x 12-1/2″, Gilders Paste ™ finish, Mild steel.
Lighting provides a wide range of opportunity for design. In this post, I will show a few of my favorite candlesticks that I created in the past several years. 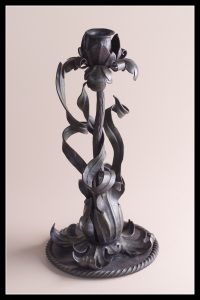 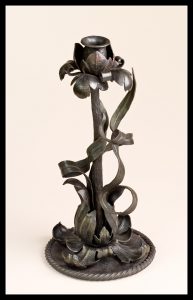 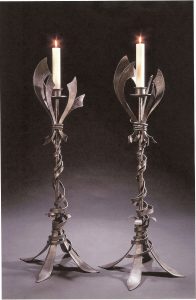 “Pair of Altar Candlesticks“, 18″ x 42”, sanded and waxed, mild steel.
The above pair of altar candlesticks are two of five made for “Holy Family Catholic Community” in Fond du Lac, WI. The interior designer requested a flowing design. The design also represents stylized wheat sheaves, representing the “Body of Christ” (bread of life.)
Below is a detail image of one of the candlesticks. 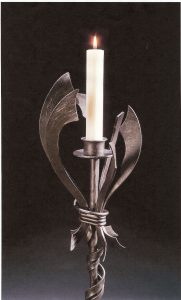 The largest of the five candlesticks was a four foot high “Paschal Candlestick”, which is used as a processional piece. Below is a detail image of this candlestick. Note how it lifts off the base for processional purposes.

In and of themselves, candlesticks can serve not only as a base for a candle, but also as a decorative statement. Atop a table, sideboard, or an altar, they provide an accent for the setting.
Accompanied by other decorative pieces, such as the picture frame below, when lit, they also add warmth. 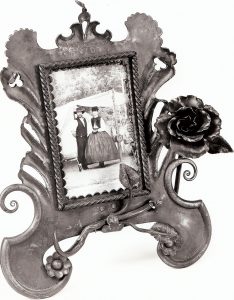 “Picture Frame 2000“, 10″ x 12-1/2”, sanded and waxed, mild steel.
The picture frame was inspired by a French frame I acquired from an antique store in 1999. This piece was actually a practice piece, as I reproduced the original French frame at the “Artist Blacksmiths Association of North America” (ABANA) conference in Flagstaff, AR in 2000. I was assisted by a former employee, Michael Jones.
Unfortunately, I was unable to acquire a photo from the person who now owns the reproduction, which he purchased at the ABANA conference auction.
In a later post, I will show some chandeliers I have made over the years.
Note: All of these images were taken by photographer George Lottermoser, of “Lottermoser and Associates.”
……..Dan Nauman
“Most people are about as happy as they make their minds up to be.” ……..Abraham Lincoln, 16th U.S. President