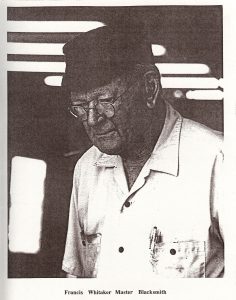 20 years ago today, I was enroute by train to study with master blacksmith Francis Whitaker (1906-1999) in Carbondale, CO.
Francis referred to himself as “a link with the past,” as he was one of the few remaining true blacksmiths alive when the forging renaissance began in the early 1970’s.
He dedicated the last 30 or so years of his life to teaching the trade that he so dearly loved. Coupled with his vast knowledge of hand forging, he has thus been referred to as the “Dean of American Smiths.”
He began forging in 1927, initially studying with Samuel Yellin, the Polish master who had set up a shop in Philadelphia. Later, Francis traveled to Germany to study with master blacksmith Julias Schramm.
Below is a bowl that Francis made while working with Schramm. 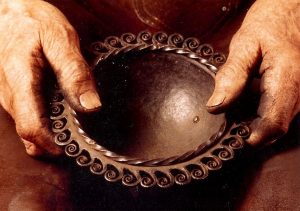 Both Yellin and Schramm had an obvious influence on Francis. He often recanted a story in which Julias asked Francis “How will you join this bowl to the stand?” Francis replied that he would “just put a few pieces in where they wouldn’t be seen.” Schramm then growled, “Oh Franz, there is never anything that will not be seen!”
These and other words would go far to shape Francis’ character, as well as his uncompromising attitude towards forging. He later adopted from Lexus the slogan: “The Relentless Pursuit of Perfection.”
Not long after his stint with Scramm, Francis set up shop in Carmel, CA. He then moved his shop to Aspen, CO. in the early 1960’s. Being civic minded and a visionary, Francis lobbied hard for both Carmel and Aspen to retain their character by keeping nationally owned chain corporations out of these areas, maintaining the charm and natural beauty of the area. Today, Aspen has a holiday, as well as a park, bearing Whitaker’s name.
Below is a railing made by Francis in his early years. (From the book “Beautiful Iron”) 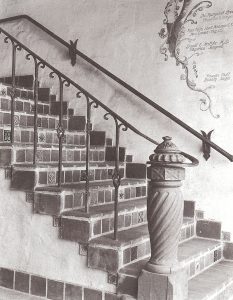 Francis also loved to ski, (he was skiing well into his 80’s) and as a result, in the early 1960’s, he invented a break-away ski binding. He sold the design to a manufacturer, who later went to patent the idea, but was thwarted as just two weeks prior, a German inventor had patented a similar binding.
While still in Aspen, Francis considered retirement, but simply hated the idea. He then approached the “Colorado Rocky Mountain School” (CRMS) and proposed that if they built a blacksmith shop to his specifications, that he would donate all his forging tools, and also teach the CRMS students how to forge. In other words, “Build it, and I will come.” The shop was dedicated in 1988.
CRMS is an elite high school for students from around the globe. It is situated on a old farm, by coincidence previously owned by Milwaukee’s own Pabst family (of Pabst Brewing fame. See “Captain Frederick Pabst Mansion” to learn more about the Pabst family.) Located in Carbondale, it sits in the midst of omnipresent Mount Sopris, one of the largest mountains in Colorado.
CRMS is charming with its dirt paths and roads, one and two story wooden classrooms and dorms, and the large, tin roofed barn, which serves as a theater. 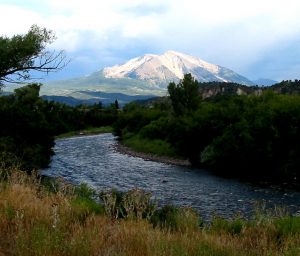 Mount Sopris, and the Crystal River, Carbondale, CO, as seen from the southeast of the CRMS campus.
CRMS also provided Francis with a house right on the campus, just yards away from the blacksmith shop, which included a deck with a spectacular view of Mount Sopris. Francis could often be found at “beer-thirty” (3:30 P.M. MST) out on his deck, taking a break and sipping one ….and only one….bottle of Coors.
My 1990 experience with Francis laid a firm foundation, as he instilled discipline, dedication, and direction for me. It was truly a life-changing experience.
That time was also exhausting, as we worked long days, and often into the night, to complete my first real architectural piece, a window grille. (shown below.) 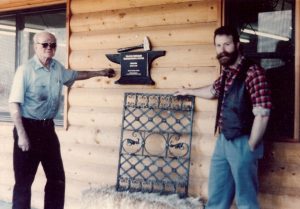 I spent another week with Francis in March of 1993 and made the garden gate pictured below. This was an exercise to make a project with as few straight lines as possible, to reinforce my bending abilities. 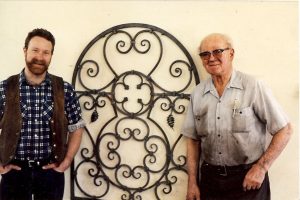 The other aspect of this design was to learn how to make a quatrefoil (seen in the center of the gate.) Francis developed a process for this form, which worked brilliantly. While some of the elements in this gate do not work well together, (as they are not of the same style,) it was a fine exercise in forging for me .
One morning, I was having quite a bit of trouble bending the scrolls for the gate. Francis gave me a few pointers earlier, but I was still struggling. I looked around the shop to find Francis for more help, but he was no where to be found.
A few minutes later he showed up donned in his skiing outfit. “I’m off to the slopes”, he said. (He was in his early 80’s!) Off to the slopes? I came here all the way from Wisconsin to learn from him, and he’s leaving to go skiing? I was stunned, as I needed help. How could he leave me alone like this?!
I needed a break so I went to lunch, and later returned to the task of bending the scrolls. The balance of that afternoon went fast, and for some reason, I suddenly was able to correctly bend the scrolls perfectly to the drawing. At about 5:30 PM, Francis returned, all red-faced from the cold. He came over to my work area and inspected my work. “Yeah”, he said, “I knew if I left you alone, you would feel less intimidated, and do better work. Fine job.”
What a fox.
Francis traveled the US annually, often with his beloved wife, Portia. Together, they would go from shop to shop so Francis could teach others what he knew. It was not his intent to teach his style, rather he wanted to instill in his students solid forging practice, process, and fundamentals.
It was Francis’ nature not to charge for his services as a teacher, though he might ask that one donate to his foundation bearing his name, “The Francis Whitaker Blacksmith’s Educational Foundation.”
He authored three books, “The Blacksmith’s Cookbook”, “Beautiful Iron”, and “My Life as an Artist Blacksmith”
He also traveled the globe, camera always at the ready to photograph the vernacular ironwork, and offered many stories of his travels upon his return. 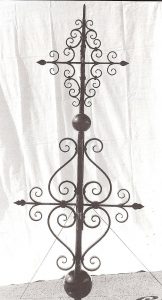 “Finial” by Francis Whitaker (from “Beautiful Iron”)
He could be found often at either the symphony or the opera theaters, as he had a love of classical music, though he forbid music of any type in the workshop.
Below are samples of some fireplace tool handles, typical of Francis’ work.
(from “Beautiful Iron.”) 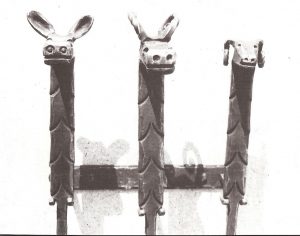 Many who have been fortunate to have known and worked with Francis knew he was easily angered by a poor approach, poor workmanship, or your hands in your pockets. But to me, his anger was of that of a grandfather, insuring that his own would follow correctly in his footsteps. 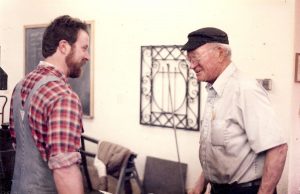 Francis taught at many workshops at various craft schools, demonstrated at countless blacksmith conferences, and in 1978 was president of the “Artist Blacksmiths Association of North America.” (ABANA)
Among his many other achievements:
Author John Steinbeck used Francis as a role model for the book “The Long Valley.”
In 1995, Francis was the recipient of the “Colorado Governor’s Award for Excellence in the Arts.”
In 1997, he was awarded the “Heritage Award”, and named “A Living Treasure”, the highest award given by the National Endowment of the Arts. The award was given to him at the nation’s White House, and presented to him by Hilary Rodham Clinton, as seen below. 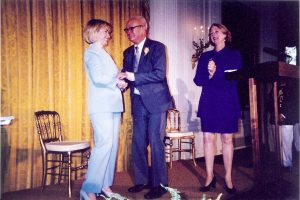 “The highlight of my life”, Francis said.
He also was honored in 1997 by the “Renwick Gallery” as they installed an iron cross made specifically for them by Francis.
Francis forged for over 72 years. I believe forging and teaching kept him young, as he was forging just five weeks before his death, at 92 years of age.
Below is one of his favorite images, showing him forging at his shop in Aspen. 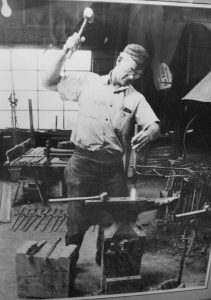 Francis was an admirer of master blacksmith Cyril Colnik. In 1997, Francis provided seed money for me to produce the video production about Colnik, entitled “Forged Elegance, the Lifework of Master Blacksmith Cyril Colnik.” Francis is featured in the video.
He also provided me with a grant from his foundation to document Colnik’s work through photography in 1993.
I owe much to this man, and I am certain many others can say the same. I am privileged to have worked with him, and feel blessed to have called him my friend.
……..Dan Nauman
“Remember, I’m always looking over your shoulder.” …….Francis Whitaker, speaking to Dan Nauman at a workshop in Cedarburg, WI in 1981.