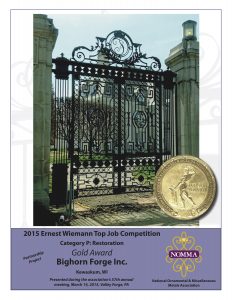 Jim Korosec of “Finelli Ironworks”, contacted me a few years ago to help his company restore two sets of identical gates in Cleveland, Ohio.  That was the beginning of a long, interesting, and sometimes trying journey.
I am pleased to announce that through a combined effort with “Finnelli Ironworks” of Solon, Ohio, a gold medal was awarded for both our efforts last month by the “National Ornamental and Miscellaneous Metals Assoc.” (NOMMA), at their annual “Top Job” competition. As only one company can enter for a given project, only “Finelli Ironworks” was recognized, however “Bighorn Forge. Inc.” will receive a duplicate gold medal along with a certificate.

We reproduced all of the rosettes, husks, and acanthus leaves for these gates, primarily using the French repoussé method of metal forming.  The original pieces were machine stamped.
I was assisted in part by Jeremiah Backhaus, who helped make the 100 compound rosettes (50 compound rosettes per gate, 200 total pieces.)  Some are near the top of the gate, all in a row, and some are at about waist height, all in a row (see image below.)

This effort took well over 1100 hours, and resulted in two carpal tunnel surgeries for me.  To give you an idea as to how much time is invested in each piece, each compound square rosette above has about 5-1/2 hours invested x 64 sets.  That equates to 352 hours, just for this series of pieces.

These gates were originally made by master blacksmith Edgar Brandt (1880-1960) of France, who made and shipped them for the estate of “Harvey Firestone, Jr.” in Cleveland, Ohio. (Original photo below.)

In order to reproduce these many forms, there was extensive research into the original pattern development, which was difficult as many original pieces were so rusted away, that only fragments remained, as the images below demonstrates.

The image above of the very large acanthus leaf pattern shows some of the remnants used to approximate the original pattern.  Note that the original “parrot’s beak” at the end (scroll-like termination) is missing entirely.  Five pattern changes on the parrot’s beak, along with three test pieces, were made before settling on one that proved to work well.
Below are some images of some of the many reproductions.

I would like to thank Finelli Ironworks, and specifically Jim Korosec, for getting me involved in this project.  By the way, Jim found me via this blog site.  The owner of the gates was ready to fly to France to find someone who could reproduce these pieces by hand.  However, just prior to him leaving, Jim found me through this blog-site, and e-mailed me about this project.  I responded, not expecting a reply from Jim, as I receive many such inquiries regarding parts made by French repoussé.  Typically, when folks realize the time it takes…consequently the monetary investment…they back off in a hurry.
However, Jim ended up calling me, and said the owner was going to fly to my shop the next day to meet with me.  Since I was driving out to Maine to teach repoussé in just two weeks, I said that I would stop by (in Cleveland, Ohio) on my way back, so there was no need for the owner to fly to my studio. And so, I met with Jim and the owner in Cleveland in August of 2012. Obviously, they trusted that I could do the job.
Below are the very last parts I made for this project, which are ribbon bows made of 20 gauge sheet metal.  There is roughly seven hours in each bow, of which there are four small and two large versions. These proved to be some of the more challenging of the forms.  However it is challenges such as this that keep me returning to the studio.

There is always a bittersweet end to such a journey.  I’ll admit, there were many times I was bouncing off the walls because of some of the repetitious aspects of this project. For example, when I was working on the square rosettes, of which there were 64, (and it takes about 5-1/2 hours per rosette)…when I got to rosette number 15, I was already seemingly headed for the loonie bin, wondering if I’d keep my sanity with so many like parts with so much detail.  The carpal tunnel symptoms didn’t help, either.
However, what kept me going was that I mentally prepared myself beforehand, knowing that I’d hit the proverbial wall at some point, and so I expected this monotony to happen…several times.  I also kept thinking that when the project was completed, I could stand in front of those gates, and have a fine feeling of accomplishment.
I also thank the owner of these gates for trusting in my abilities.  (I keep his name anonymous in respect of his privacy.)
And so it has ended, with that very satisfaction as my main reward.  I also learned a great deal during this process.  Lastly, I wish to thank the Lord my God for giving me the where-with-all to accomplish the task.
…Dan Nauman, April, 2015
“Leadership is the ability to transform vision into reality.”– Warren G. Bennis