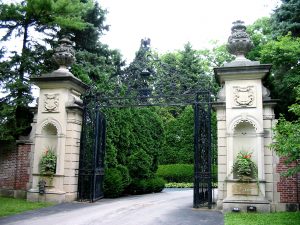 Of all the ironwork I have seen in this country, this fine Baroque style gate stands to be one of the finest installations, as it is truly exceptional in many aspects.
I happened upon this while researching an unrelated prospect about eight years ago, with an interior designer south of here in Lake Forest, northern Illinois. Fortunately I had my new digital camera handy….unfortunately, we were pressed for time, and I did not review the images. The gate was also facing the north, on a cloudy early morning, which makes for poor lighting.
Consequently, I am sick that I did not record better images, nor the address and other particulars to further research this exquisite bit of forging. 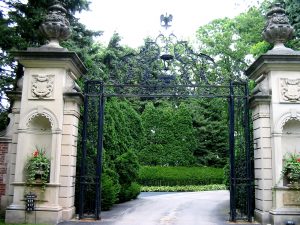 The workmanship in this gate, both the ornament, as well as the main structure is extraordinary, and cleanly executed. 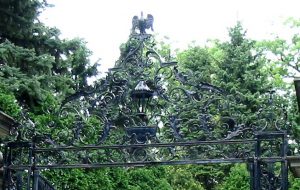 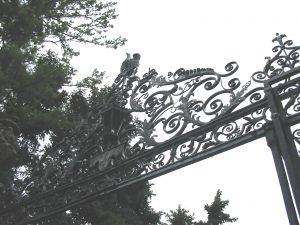 Notice on the upper side panels how the scrolls align with the corners. 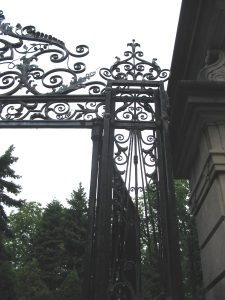 Below shows one of the substantial gate leaves. The spear-shaped elements at the bottom are referred to as “dog-bars.” Their original intent was as the name implies, to keep dogs from climbing a gate. They have subsequently become more of an ornament than a functional element. 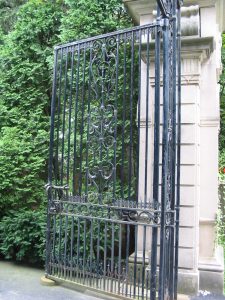 We see the pivot bar and joint in the next image. 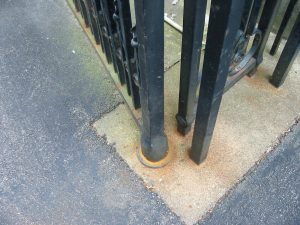 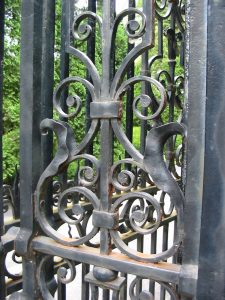 Here are some views of the side panel features. The gracefully tapering “halfpenny snub-end” scrolls are delightful. The leaves shown are called “water leaves”, and are nicely forge welded (fire welded) to the scrollwork. 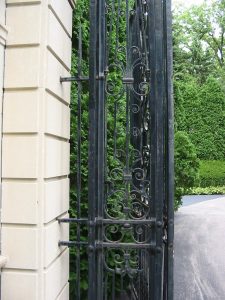 This next image shows the massive and well executed “mortise and tenons.” 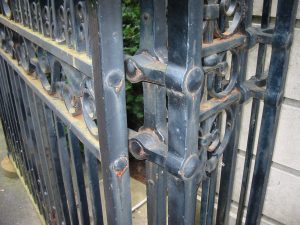 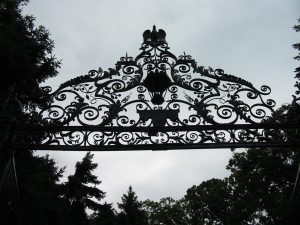 Though there is some surface corrosion, this gate is in excellent condition, unlike many gates up here in the rust belt.
To satisfy my curiosity, and to continue my research, I need to retrace my footsteps of that day to hopefully gain more insight as to who made this gate, and when.
There is another gate in the area that bears attention, that of the “Dewes Mansion.” I have been informed by a few sources that this mansion is the home to some massive gates that appeared at the German Ironwork Exhibit at the great Columbian Exposition of 1893 in Chicago. (See below.) 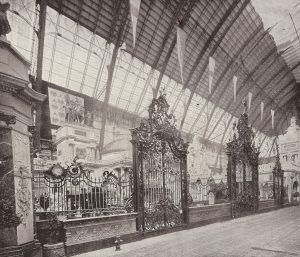 If indeed these gates are there, it should make for a thrilling visual experience, and well worth the trip south.
……..Dan Nauman
“It is better to wear out than to rust out.” …….Richard Chamberlain, Actor