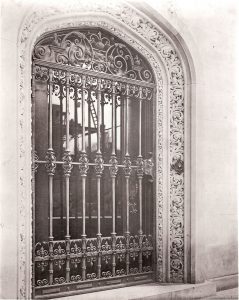 Today we will again explore the work of master blacksmith Cyril Colnik (1871-1958), and Austrian immigrant who settled in Milwaukee in 1894.
Note to my readers: To enlarge these images, simply click on the desired image.

Above is a grille, which was later reinstalled on Terrace Avenue in Milwaukee at the former Mayor Black home, across the street from “Villa Terrace Decorative Arts Museum.” If you look closely, you will see that there must have been some work going on across the street as there is a reflection of a ladder in the window. This piece shows off Colnik’s flair for repoussé, with the fine acanthus and calyx work.
The below images show an iron door of an unknown location. Here we see a different type of repoussé applied, likely performed on a bed of pitch. 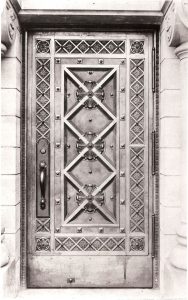 Below is a sign bracket for a wallpaper and fabric company. Note how Colnik blended the oak leaf motif with the building ornamentation. 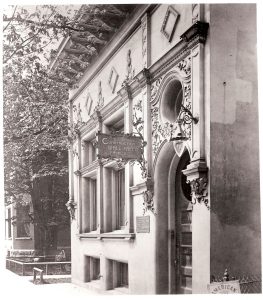 At the H.C. Prange Co., Colnik installed this massive overhang, shown below. Note the contrasts in this image, indicating the old and the new. 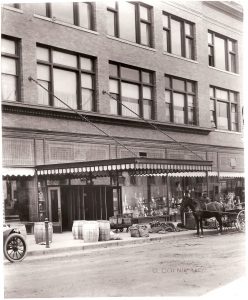 Finally, we have a gate from the former Uihlein Candy Company, which was located on Port Washington Rd. in Milwaukee. This is one of two gates of the same design at the Candy Co., the other set being slightly smaller. The Candy Co. was owned by the Uihlein family, the same of which owned the Schlitz Brewing Co. The Candy Co. was their answer to Prohibition.
The smaller set of gates were recently purchased by a descendent of Herman Uihlein. I was fortunate to have been elected to restore these massive gates. Each leaf of the gates weighed approximately 900 to 1000 lbs. I erected an overhead crane in my shop just to accommodate this job. 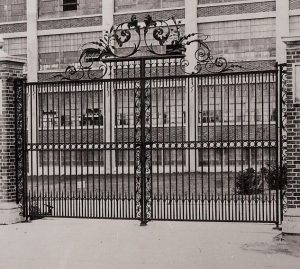 The smaller gates were advertised in the Milwaukee Journal Sentinel in the classified ads. I was called upon to see if the gates were of any real value, and to see if they were by Colnik’s hand. I surveyed the gates, noted that they were in good condition, of fine workmanship, but could not find any evidence that they were by the hand of Colnik. About 2:00 AM, I awoke and realized I may have an image in my Colnik archives of these gates…..curious how these things happen in the middle of the night. I went downstairs to the office, and sure enough, I found this image, providing solid proof (provenance.)
I called the prospective buyer at 8:00 that very morning with the good news.
…..Dan Nauman
“We’re all proud of making little mistakes. It gives us the feeling we don’t make any big ones.” ………Andy Rooney, CBS Commentator.