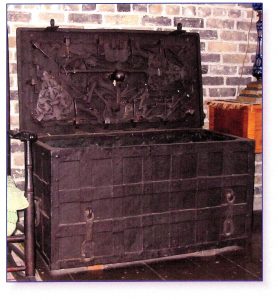 This piece deserves a chapter all by itself. I had the privilege to clean this iron chest, as well as a smaller version, for the same client.
I had only seen one of these chests, or “strong boxes” one other time before seeing this one. I was in Asheville, NC touring the Biltmore Estate, which was built by George Washington Biltmore. (See below) 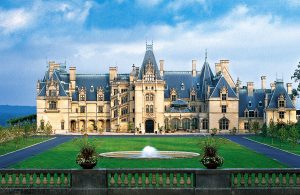 Comparatively speaking, the building in which I encountered this speciman was modest, but obviously….not too modest by other standards.
These chests are incredible, as the entire lid is the locking mechanism. Note that this lid has 14 bolts.

A single key inserts into the center of the lid, and when turned, all 14 bolts simultaneously retract, allowing the keyholder entry into the box.
This type of work is specific to locksmiths, who in centuries past, were often regarded as the “mastersmith’s master.” The detail of the workmanship is astounding. Though in this case the inside of the lock (the lid itself) can be readily seen by the keyholder, the inside of a smaller lock, such as a lock for a door, was never seen by anyone else but the locksmith himself. Once he completed the piece, the lock was sealed with a lid using screws, rivets, or posts.
I have veiwed the interior of several intricate locks, and often the same attention to detail on the exterior of the lock is also present on the interior.
This is a quality standard unmatched, and is the height of fine workmanship.

Note the fine “engraving” and “chasing” in the workings of the lock. Engraving is performed by using a very small, fine pointed chisel, which in turn is lightly struck by a tiny hammer. This work is done freehand. You may be familiar with engraving, as it is commonly applied to the actions of fine sporting arms such as shotguns and rifles.
Chasing is unlike engraving, as engraving actually removes material, while chasing moves material aside. Chasing tools are also small, and are also struck by a tiny hammer, pushing the metal away, or “chasing” it from where it was. 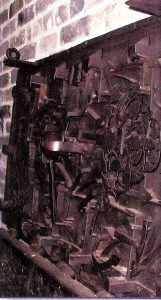 The image above allows a better feel for the dimension of the workings.
Here are two more images from different perspectives. 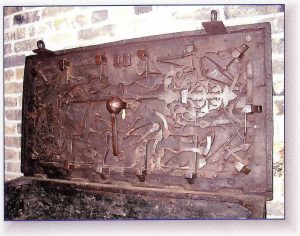 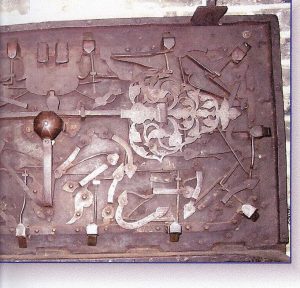 Details aside, the engineering of the locking machanism in itself is quite the feat.
Click on any of the images to see an enlargement of the image.
The other strong box (not shown here) was missing its key. I introduced my friend, and fellow blacksmith Tom Latané of Pepin, WI, to the client, as Tom is capable of producing a key, as he is himself a fine locksmith.
It was obvious to all that there was something inside this box, and the anticipation of “what” had all of us imagining. Nobody in the client’s household had ever seen the box opened…..which added to the mystery of what the box was protecting.
One day I received a phonecall from Tom, as he had successfully reproduced a key for the box, and had opened it. After he gave me a rather lengthy explanation of how he went about making the new key, he finally revealed what treasures were hidden away all these years inside the box……old newspapers from the early 1960’s. Aaaaaarg! Geraldo should have been there!
Have fun examining this piece.
In a later post, I will show some of the more intricate door locks I have cleaned.
…….Dan Nauman
“Inviting people to laugh with you while you are laughing at yourself is a good thing to do. You may be the fool, but you’re the fool in charge.” ……Carl Reiner