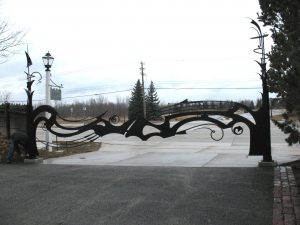 (Note: To see a larger image, click on the image.)
I have been privileged to have had several commissions at “Lynden Sculpture Garden” on Brown Deer Rd., just north of Milwaukee, Wisconsin.
This gorgeous site was the home of Harry and Peg Bradley, who purchased the grounds in 1927. Originally farmland, this estate was transformed into an English country garden. In 1962, Peg Bradley, an experienced art collector, began collecting contemporary sculpture. Now open to the public, (as of March, 2010) Lynden is considered a world class sculpture garden. (See the blogroll at the right for a link to Lynden.) 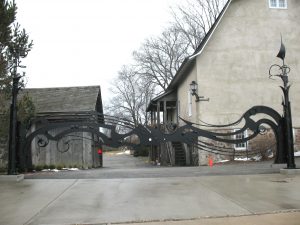 This main driveway gate was installed yesterday, which began with a cool ESE wind, along with mist and temps in the mid 30’s…not ideal for an installation, but for late February in the north…I’ll take it. These images were taken the same day, so the light was not ideal. I will have George Lottermoser, a fine photographer, shoot some better images once things are in bloom. 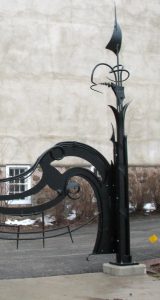 This driveway gate measures 14 feet tall, and 26 feet wide. Thus far, it is the largest project to emerge from Bighorn Forge. I erected a jib crane in the shop to move the piece back and forth from the lay-out table to the shop floor, as even three brawney men had trouble moving the individual leaves about.
Smaller details, not in the original design, were added as the scale of the piece provided a huge canvas for more embellishments. For example, many of the longer bars were forged into an octagonal cross section. This simple, but time consuming detail adds additional facets to reflect light, creating a bit more for the eye to enjoy.
But the larger story lies with the design, which was intended to be almost entirely asymetrical, with a feeling of movement. Most features direct your eye to the next, or play on the lines neighboring the motif.

The gate is the first thing patrons will see when entering Lynden, and since this is a sculpture garden, I wanted the gate to reflect this theme. I also intended to display the many plastic characteristics of the material in a potpourri of form…call it “Jazz in Metal.”
That said, each element can be viewed as an individual, however each motif also plays with lines or characteristics of a near neighbor; much like the instruments in a jazz band. Close inspection reveals elements seemingly doing there own thing, while the larger picture provides a visual roller coaster ride of forms.
As I said earlier, I will have George shoot this gate when things green up a bit. George also has a fine way of capturing details through photography, often difficult to do when shooting ironwork.
…Dan Nauman
“Whether it’s the best of times, or the worst of times, it’s the only time you’ve got.”…Art Buchwald, Syndicated columnist