Master Blacksmith Cyril Colnik (1871-1958) came to the United States in 1893 along with the German government to the 1893 Chicago Columbian Exposition.

Born on September 20th in Triebein, Austria, Colnik initially studied metalwork locally. According to guild tradition, he then traveled Europe as a journeyman, which brought him to the Munich Industrial Arts School. The faculty recommended Colnik to help set-up Germany’s ironwork display for the Chicago Expo, under the guidance of master blacksmith Reinhold Kirsch.

A true virtuoso in metal, Colnik forged “Masterpiece” (shown above) at the early age of 18 years. This fine piece, showing what many believe is the image of Woton, or “god of ironworkers”, has a potpourri of forms that many scholars of metalwork believe to be unequaled. “Masterpiece” was displayed at the expo, and achieved a gold medal.

While in Chicago, Colnik heard of the “German Athens” to the north (Milwaukee), and found a home as well as a stage for his fine works in iron. At this time, Milwaukee’s population was largely German by either birth or descent, with many German based breweries, sausage makers, and fine craftsmen.

Many of these men were known as “Forty Eighters”, or German immigrants who came to this country in 1848. They came to Milwaukee in search of a new beginning, and a better life.

By the end of the 19th century, many of these individuals had amassed huge fortunes, and were beginning to show off their wealth by building large mansions, showcasing the works of the area’s many fine European craftsmen. It was a way of bringing a bit of ‘the old country” back into their lives. Colnik’s timing couldn’t have been better to launch his business. 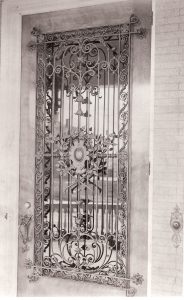 As a result of this boom in building, Colnik’s work can be seen in and around Milwaukee’s finest homes and businesses. Many notable Forty Eighters such as Captain Frederick Pabst (Pabst Brewing Co.), Herman Uihlein (Schlitz Brewing Co.), Lloyd Smith (A.O Smith Co.), and several other 19th century entrepreneures utilized Colnik’s mastery for their exquisite mansions. Today, one can still peruse the streets of Milwaukee to see Colnik’s finery.

His work can be seen up close and personal at “Villa Terrace Decorative Arts Museum” (Milwaukee,) which was the home of Lloyd Smith and family. Villa Terrace houses a fine and varied collection of Colnik’s work in two galleries. (See more on Villa Terrace at www.cavtmuseums.org.)

Colnik’s attention to details is what endears his work to so many, as the longer one examines his work, more and more details are thus discovered. This is what makes us return to see what we might have missed in a previous viewing. His works have inspired and influenced my work to a great degree.

Much of Colnik’s work can also be seen in this blog by clicking “Master Blacksmiths” under “Categories.”

Note: In 1998, a video entitled “Forged Elegance, The Lifework of Master Blacksmith Cyril Colnik” aired on Wisconsin and Milwaukee Public Television. I was the project director for this effort, which was a dream of mine for many years prior. Now in DVD format, copies of this presentation can be obtained from Villa Terrace Decorative Arts Museum.

It is my pleasure to showcase the work of one of the world’s truly great master blacksmiths.