Repoussé artist, Nahum Hersom, passed away on April 1, 2011. He would have been 93 on April 15.
“Grandpa” , as he was known to his students, lived in Boise, Idaho. His shop was a converted garage just next to his house on Innis Street.
Repoussé is a form of metalwork which uses sheet metal as a medium, and employs small hammers and stakes to form the material into myriad shapes, giving the once flat sheet incredible volume, and often flowing, sensuous curves.
Nahum made a huge contribution to metalwork by preserving, teaching and promoting this artform. In an age of instant access to almost anything, the art of repoussé stands in contrast, as it requires patience, hours of practice, and deep concentration.
Nahum learned this process from one Valintin “Papa” Goelz, a German metaworker who owned and operated Valintin Goelz Art Metal Works. Nahum often talked affectionately about Papa Goelz. (See the poem Nahum wrote about him at the end of this post.)
Repoussé is about a multitude of tools, and hand-made tools at that, as you cannot buy these tools from the store or catalogue. So Nahum made tools….LOTS of tools, sometimes he would make a hammer or stake for just one minor detail. Below is an image of some of Nahum’s hammers. 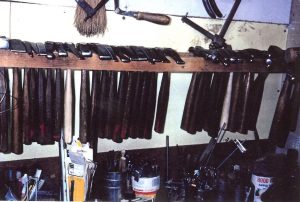 Bottom stakes, typically held in a vise, were even more abundant in his shop. Here again, stakes were made for specific forms, and Nahum had hundreds of them. Below is just the tip of the proverbial iceburg. 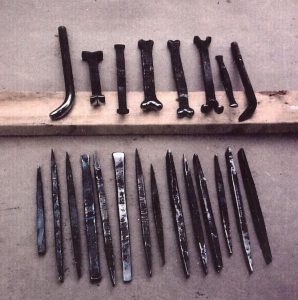 Here are some more…. 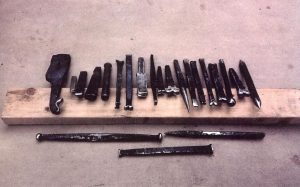 These are his favorites, but he had a multitude more, all gleaming and stored in empty soup cans.
One thing that many may not know about him was this: Nahum was an extremely deep thinker, quite the inventor, and a fine mechanic.
He made a shears, similar in style to one known as a “Beverly”, which is used to cut sheet metal. It is made so that straight, as well as curved lines can be cut easily in the sheet stock. Below is his version of the shears. 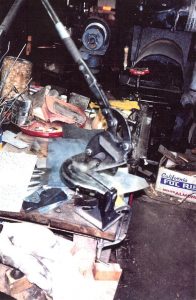 He also made his own version of a “Treadle Hammer”, a foot controlled hammer, which is essentially the blacksmith’s third hand. (Below.) 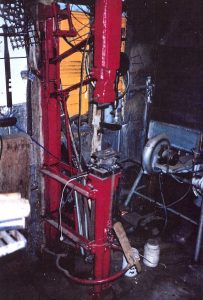 And below is his veining tool, of which had interchangable top and bottom dies. 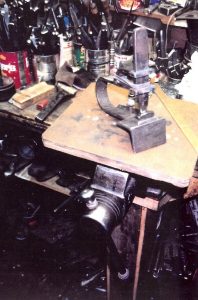 Below are some horizontal vise stakes, and some of the anvils and top tools for the veining tool. Note that the top tools and anvils are rounded, so the tools can produce curved veins as well. 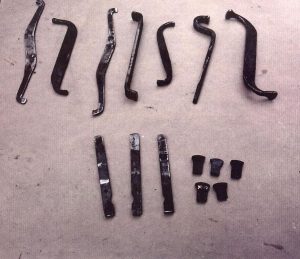 Nahum attended Lake View High in Chicago, IL. 1933-36, as well as Chico State College in California.
From 1941-1944, he was a welder for Lockhead Aircraft, Burbank, CA, and a Metalsmith 3/C for the U.S. Navy from 1944-1946.
He was also a blacksmith, and did building and repair of machine tools.
A few years ago, Jerry Henderson wrote a book, based on Nahum’s teachings entitled “Nahum Hersom: Repoussé”. The book is something Nahum had talked about since I met him in 1993. It is one of the few books printed on this process. (To acquire a copy, Jerry can be reached at 35493 Millard Rd., Warren, OR 97053.)
Probably one of the biggest highlights of Nahum’s life happened just a few years ago. Nahum was the recipient of the “Idaho Governor’s Award in the Arts”, the first time ever for a blacksmith to win this award. After receiving the award, he said in his fine folksy manner, “I was amazed that I got it with all the people in Idaho who do art and craft work. On the other hand, this is big craft work, not the rinky-dink stuff.” (Quoted from Tim Woodward, in the newspaper, “The West”.)
Nahum demonstrated repoussé at many conferences, and also taught well over 50 students at his “Golden Pheasant Art Metal” shop in Boise.
Below is a piece Nahum made for the 2006 Artist Blackmith Association of North America (ABANA) Conference. It is also the cover of the book on his work. (Unfortunately, it is the only image I have of his actual work. If you have an image of Nahum’s work you could share, I would appreciate it if you would send it to me so I can publish it on this blog.) 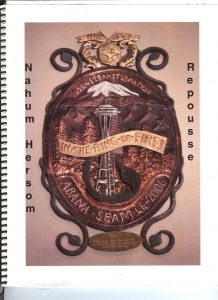 In 1993, I had the privilege of studying under Grandpa at the Golden Pheasant. It was 102 dry degrees in the shade, but I was unaware as I learned to use the delicate tools of repoussé.
The lessons were one on one, and Nahum was never at a lack of something to show me as we worked. He was big on archiving, and he supplied me with a constant parade of patterns, articles, and images from his many years of study.
“Did ya ever have one of those, ya know, ‘Ah-ha!’ moments, Dan?” This was typical of the way our conversations went, as he would come up with a thought from way beyond left field.
“Those ‘Ah-ha!’ moments may seem to be coming from out of no-where, but they are actually coming from your sub-conscious mind, Dan. Have ya ever been working, and it just isn’t going well, and you get frustrated? Then you call it quits, and go and do something else? Then, when you least expected it, the answer to your problem just hit you between the eyes? That was your sub-conscious mind working. Ya-know, you can learn to use that sub-conscious mind of yours. Put it to work. Your mind works on problems even when you aren’t aware of it. Then, all of a sudden….”Ah-Ha!” (He smiles, pauses, and waits for me to say something. I say nothing, and keep working.) He then said, “You think I’m nuts, don’t you.”
Nuts like a wiley coyote. He is right, it works, if you learn to employ it. Though at the time, I might have thought he was a bit off. After I returned home, I tried using my sub-conscious, and I was pleasantly surprised, and a bit shocked at how allowing one’s brain to work in such a way is very effective. (You think I’m nuts, don’t you.)
I could go on, however I am sure my personal memories and ramblings about him are not as interesting to you. But I hold them dear.
Nahum literally changed my life. His teaching’s allowed me to venture into an aspect of metalwork seldom used in recent times.
Repousse’ was and is a process that opens new doors for a blacksmith. It can enhance the work of a blacksmith, gracing gates, furniture, lighting, and much, much more. Below is a chandelier I made using the methods Nahum taught me. 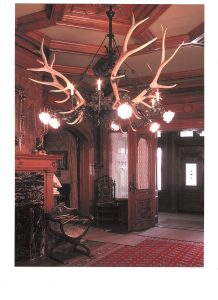 I could not have even thought about producing this chandelier, (which is actually a re-production of a piece made by Master Blacksmith, Cyril Colnik), without Nahum’s instruction years prior.
Over the past 18 years, I have incorporated repoussé in several of my own works. I still thrill in watching absolutely flat and lifeless sheet bloom into a flowing, curvaceous piece.
Beyond his teachings in repoussé Nahum’s work ethic and inventiveness also rubbed off on me. He once said that “You’ll never get paid for the hours you put into this style of work. But the personal rewards are plenty.”
Anika Smulovitz, a professor of jewelry and metalworking at Boise State University, was commonly at Nahum’s shop taking lessons from him. “I met Nahum at a gem show and was so impressed that I took a summer workshop from him. Now I take a lesson a week,” said Anika. “His work is amazing, and he’s devoted to teaching…..two people came all the way from Australia to take lessons from him.” (Quoted from the newspaper “The West.”)
And so I continue to ramble on about him. I will stop for now.
What I will do is publish some of Nahum’s teachings and provide some of his drawings from time to time to share his knowledge with you. I am sure he would like that.
That said….
Here is a poem that Nahum wrote about Papa Goelz:
“Divine Journey”
I met a man upon my path
His shop a wonderment to see.
Pieces of repousse’ covered its walls
He peered across his glasses top,
And loud in German accent clear,
He said, “You vant to learn dis vork?”
You don’t know vat you ask.
The vork iss dirty and the pay iss low,
But the art makes vork to last.
You will love the vork with patience,
And a heart that’s strong,
As this work becomes a lover,
It’s passion a life-long song.
“Tools” he said, “you make. You cannot buy.
You will fashion them with love to last a lifetime.”
So as I started, his arm around me came,
“You are now my Sonny Boy,
And I your ‘Papa’, the master of your trade.”
“Why are you so glad to teach me this?”
His answer was clear and true.
“God and the craft pick the man to do the work,
And the chosen one is you.”
He now is gone where craftsmen go,
But sometimes in the night,
When I have hammered hours long,
And something is not right.
I feel his hand on my shoulder,
And hear his voice in my ear,
“Do it this way, Sonny”
And his way is right and clear.
Thank you Papa, for this passion, and its song.
Nahum Hersom (Grandpa) July 31, 1996.
“Thank you Grandpa, for your passion, and for teaching me that song.”
….Dan Nauman
I would like to thank Anika Smulovitz for providing information on Nahum. Anika was also instrumental in helping acquire letters of recommendation for the “Idaho Governor’s Award in the Arts” for Nahum.
“God and the craft pick the man to do the work, and the chosen one is you.” ….Nahum Hersom

Update:  Since writing this post, I have published several posts that are of Nahum’s writings on French repoussé. You may peruse them here. Included with the writings are Nahum’s patterns for hammers, stakes, some leaf forms, and more. – DN