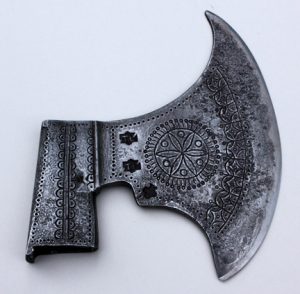 My friend Tom Latané of Pepin, WI, recently completed the above Norse style axe. Tom and his wife, Catherine (Kitty), visited Norway last year. While there, Tom inspected some locally made axes, and used the axes pictured below as models for his axe. 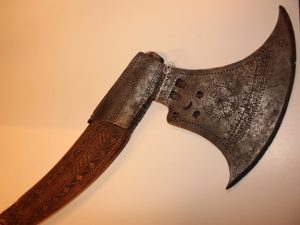 Havard Bergland was the host of the Latané’s, and taught Tom edge tool forging. He also taught Kitty the wood, silver, and leatherwork involved in finishing knives. Havard gave Tom an axe pattern that had been in his family for generations. According to Havard, all farmers were required to own such an axe to arm themselves if they were called upon by their king to defend the country. (Note: These pieces are from the Maihaugen Museum collection in Lillihammer, Norway, and image copyrights were given to Tom Latané.)
Tom’s axe required 16 hours to complete. The socket was formed by wrapping the pre-formed eye walls around a mandrel and then welding the bottom together. The scarves on the top half (separated from the bottom half), were left protruding, to weld to the blade material, after the tool steel bit had been welded at the far edge. The blade was spread and trimmed after the welding was completed.
Tom will be teaching the forging of this type of axe at “North House Folk School” November 1st -3rd, 2011, and at Tunnel Mill in the spring of 2012. Both classes will be three day classes, so students should expect to work hard to complete the forging, then they will apply the decoration at their homes.
For more info about classes, contact Tom at (715) 442-2419.
If you wish to see more axes of this nature, visit “Leigh Yawkey Woodson Art Museum“ in Wausau, WI, as they have a current exhibition entitled “Axe Lore.”
….Dan Nauman