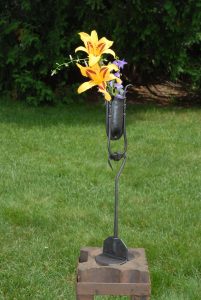 (All images taken by Richard Wunsch.)
Last week, I served as “artist in residence” at the “Leigh Yawkey Woodson Art Museum“ (LYWAM) in Wausau, WI. I was demonstrating there for five days, and also taught 30 people basic forging on three evenings.
LYWAM is a must to visit, with a gorgeous sculpture garden featuring bronze wildlife sculptures, a private garden, and more. Inside this vintage brick timber-framed building, there are several galleries of wildlife art from artists from around the globe, plus two galleries of traveling or special exhibitions.
Currently, there are two exhibits featuring ironwork of differing styles: “Iron 2010” is an exhibition of 21st century metalworks, an exhibit that began in Memphis, TN, at the “National Ornamental Metals Museum” during the “Artist Blacksmith Association of North America“ (ABANA) conference. “Axe Lore” features period axes, of American and European origin, along with other period tools. 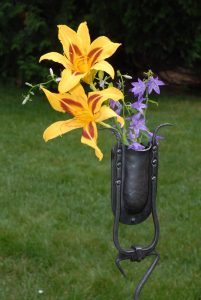 I made several pieces while there, some in forged iron, some in French Repoussé. The above images show a vase that I made during the last three days there. The image below shows the audience involvement. 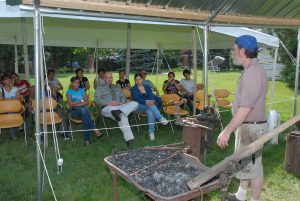 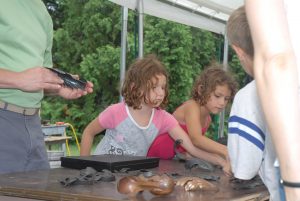 The image above shows folks inspecting the sample repoussé pieces that I had made and displayed.
Below are images of various parts of the vase in progress. 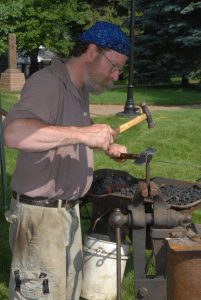 The above image shows the beginning of one half of the vase, made of 1/8″ mild steel plate. 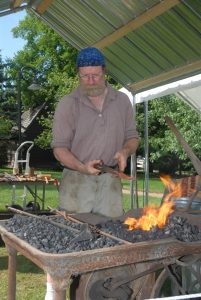 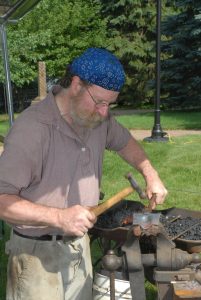 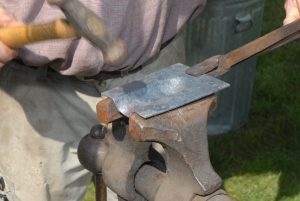 The image above shows one half of the vase in the vise prior to trimming the edges to their final shape.
The image below shows filing both halves of the vase to shape. 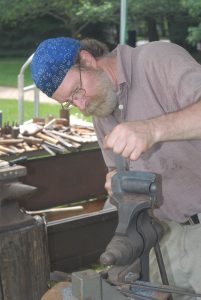 Next, I forged the stem, made from 1/2″ round mild steel, as seen below. 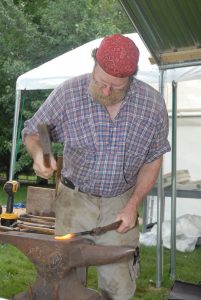 Below is an image showing the final shaping of the base, made of two pieces of 1/8″ mild steel plate, and then riveted together. 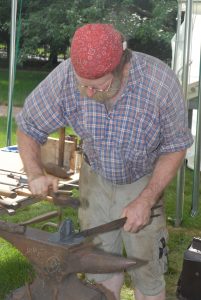 Below is the finished vase. The yolk was made of 3/16″ x 1″, which was split, and then a tang was made to wrap around a boss on the stem.

As I said earlier, I instructed 30 folks in basic forging. These students made “S” hooks and “J” hooks, in 20 minute sessions, two persons per session. Below are some of those students having fun forging. 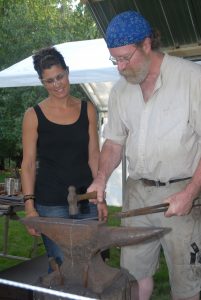 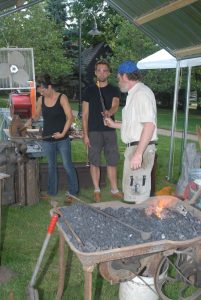 Thanks to all of the staff at LYWAM for making my stay comfortable. Wausau is a wonderful city, rich in history, providing culture to the northwoods.
Note: All images taken by Richard Wunsch.
…Dan Nauman
“I am the Way, the Truth, and the Light.”…Jesus the Christ.