I recently completed this maquette, designed for a client whose home overlooks Lake Michigan from atop the bluffs.  My goal was to capture the essence of the Autumn gales (swirling winds and water), dubbed “the witch of November” by the mariners of the Great Lakes region.

I had already made several drawings for the client of several different designs.  However, I wasn’t 100% excited about any of them, and consequently, I told them I was going back to the drawing board.

This design actually hit me in the wee hours of the night while lying in bed.  As not to forget the idea, I rose, and went down to the office to make notes.  The curious thing about this piece was that I typically make a scale drawing for my projects.  But I had the idea so solidly embedded in my head, with much anticipation, I embarked on the project the very next morning without a drawing. 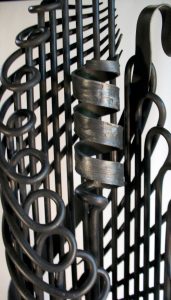 I did make scale drawings on the layout table of some of the patterns, and did the math so each bar’s termination would end up in a specific spot.  However, I did want to take the project at a slow but sure pace, leaving a bit of spontaneous inspiration to come from the process itself…and I wasn’t disappointed.

The final forged piece, (the swirling ribbon as a centerpiece),  took some thought.  I tried various motifs, some very different to add contrast, and some going outside the box by starting inside and wrapping around the perimeter.  None seemed quite right, especially the latter which made the piece top-heavy.

Pondering again the winds and water, I was pushed to further reflect on the turbulence, yet the interaction of these elements that produce storms out on this great lake.  Then the idea of a volute form struck me, but with some contrast to the rest of the piece.  So I envisioned a ribbon, with texture to offset the otherwise smooth and flowing plate.  This seemed perfect, as it subtly represents the epicenter of a storm.

I also wanted the audience to have a intriguing view from any vantage point.  The intersecting lines, plus the positive space of the plate flowing around the piece gives the feeling of movement from all angles.

The full scale sculpture will incorporate 1″ bars, which will be a challenge, however very dynamic in the end.  That said, I am also giving the client the option of a 3/4 version at 66″ high, made with 3/4″ bars.